While in Ottawa last week, I attended the monthly OVAR dinner. There, I met up with Doug Lake – a traction enthusiast whom I’ve known for years. And I ended up with this delightful little HO scale model of a McGuire-Cummins sweeper: 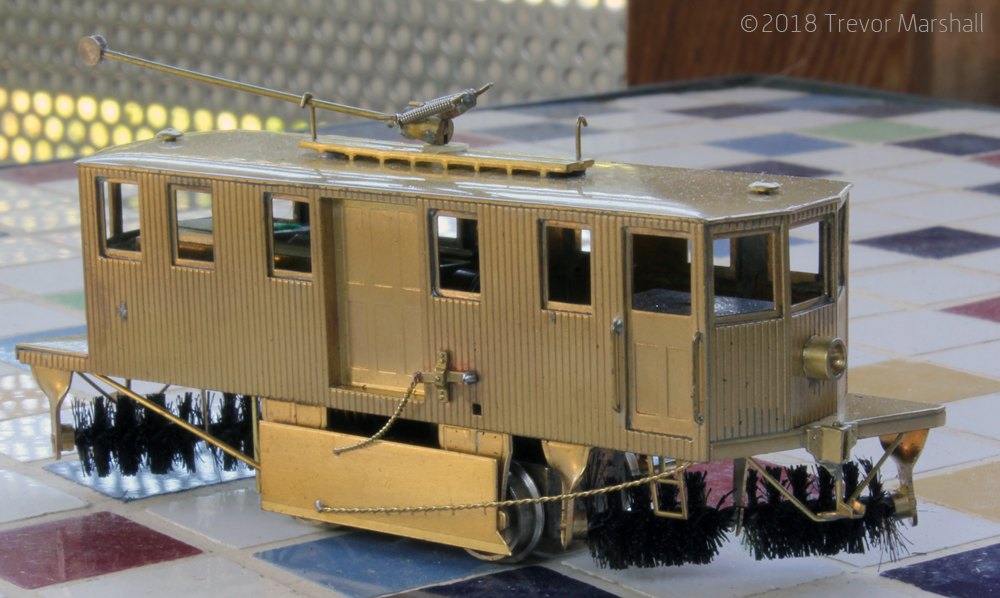 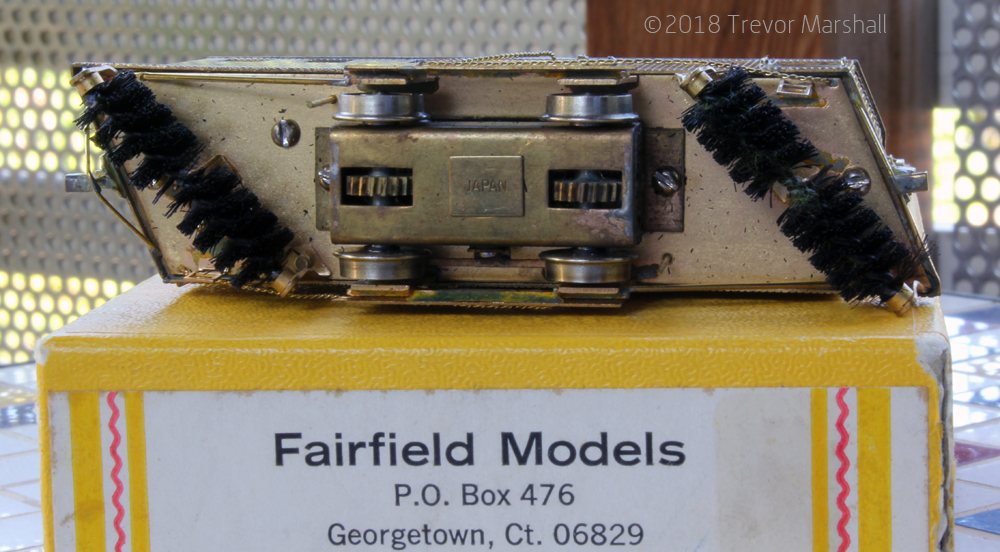 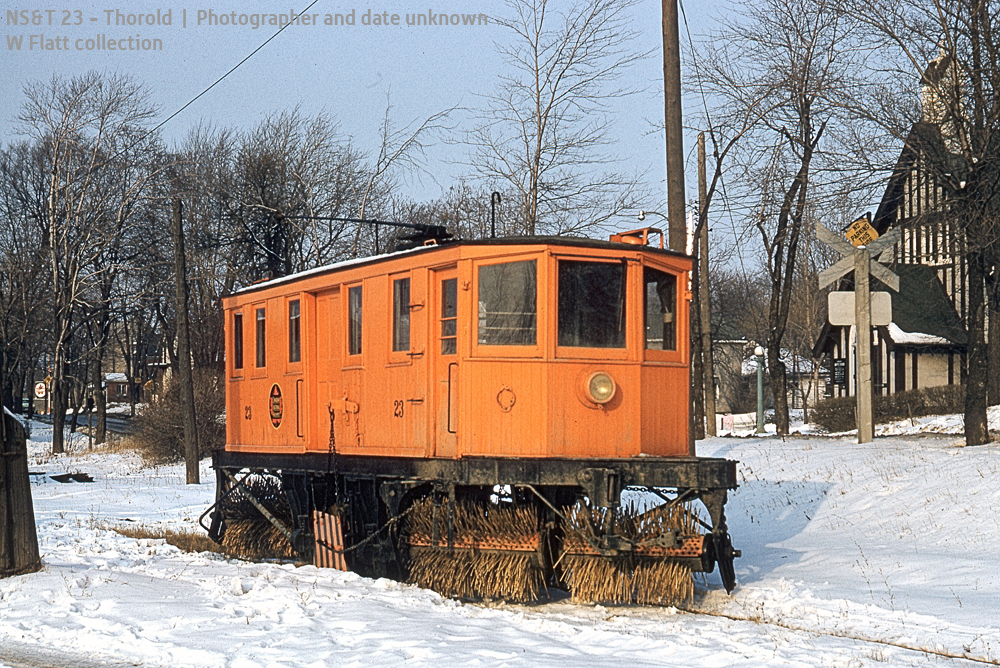 This story of the HO sweeper starts with a much bigger piece of interurban equipment:

Back in the 1990s when I lived in Ottawa, I owned the above Suydam HO model of an Illinois Traction Class C four-truck freight motor. At the time, I was refocussing my hobby – I do that a lot – and I didn’t really need this freight motor, so I sold it on to Doug.

(I will admit I kind of regretted the sale afterwards because the locomotive was a favourite of mine – but Doug could put it to better use than I could and would get considerable enjoyment out of it, so overall I was glad to see it go.)

Fast-forward 20 years, and Doug got in touch earlier this month to ask if I’d be interested in reacquiring the Class C. I thought about it and decided that yes, I would. I told Doug that by happy coincidence I planned to be at the OVAR dinner in September, and asked how much he’d like for the model.

Doug’s deal was remarkable: I could have the model as long as I took a bunch of other models off his hands, too. All for free.

To make a long story short, I’ve ended up with several neat pieces of brass – including my Class C. I’ll use this cool HO sweeper as a study model for building my own version in S scale – and probably paint the HO model up as NS&T 23, just because.

Meantime, I’ll keep select pieces from Doug’s collection and pass along the rest to friends. I’ll be sure to tell them of Doug’s generosity!

Many photos were taken of the Niagara St. Catharines & Toronto Railway and most of the best ones have been published – often several times. But occasionally, a rare one pops up. That’s the case with this photo, which I found in the collection of photographs, maps and other materials I’ve recently acquired from William Flatt:

Car 80 is heading northeast towards downtown Thorold and a stop at the station, while Line Car 31 works on the overhead near the Exolon plant.

Car 80 was a one-off. The second car to carry this number on the NS&T, it was built in 1915 by Kuhlman. The 57′-6″ car weighed 69,740 pounds and could accommodate 64 passengers. The car was originally a combine, but was rebuilt in 1939 to remove the baggage compartment. It was further rebuilt in 1941 after a collision with Car 82.

I have to admit, the location of this one was a complete mystery to me – but there were enough clues in the photo that the sleuths on the NS&T Facebook group were able to determine where it was shot. A special shout-out to Aaron White for his detective work!

“The 1965 imagery from Brock University shows a house with two dormers on the corner of Shriner and Queen Street, which was apparently expropriated and demolished before 1969, as Highway 58 goes right through that area now. The substation would then be for Exolon. Also of note is that the track closest to the photographer is under construction (it has no ballast), and has tie plates, which the NS&T seemed to only have adopted later on. The catenary also hasn’t been installed yet.”

Here’s the aerial photo to which Aaron refers, with his labels:

While there’s no trolley line over the new track in the foreground, I noticed that the pole to the right of the line car has a cross-arm to support two wires. A close look reveals that those two wires come together behind the rope to the trolley pole on Number 80. While I can’t see any evidence of track in the grass, it’s obvious there’s another track behind the line car. And “checking the wires” has become a new tool for determining track arrangements.

There’s not much left from this scene today. As Aaron noted, the house with two dormers has been destroyed to make room for Highway 58. Exolon is also gone. But exploring the area reveals that a power station (seen at the extreme right of the lead photo) still occupies the site: 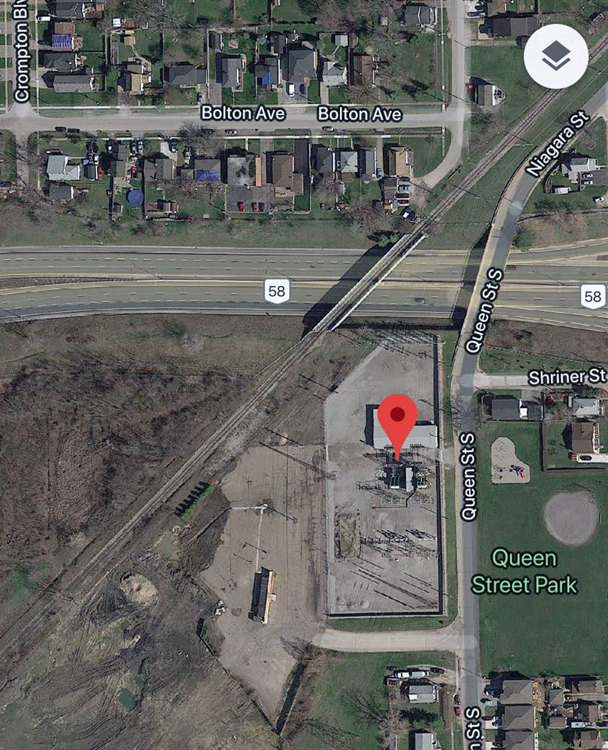 One of my favourite aspects of writing this blog is the research – and I’m thrilled that others, more knowledgeable than me, are so enthusiastic about sharing what they know…

The sweeper is parked on the coal shed spur track in the small yard at Thorold. At one time, this was the A Martin & Sons coal dealer – but I’m not sure of ownership at the time this photo was taken. Ormond Street is in the background, and the brown and white church still exists.

Number 22 is seen here in the yard at the Welland Avenue car barns in St. Catharines. To its left is NS&T freight motor 20, a 55-ton GE model about which I’ve previously written.

To its right, there’s a decent view of the section of the building that was devoted to maintaining CN Transport Ltd buses. (The CGTX tank car is a mystery – I’m not sure what it’s delivering to the car barns – possibly fuel for the buses?)

At the extreme right, another freight motor slumbers. It could be NS&T 18 or NS&T 21: Both featured unique bow-shaped handrail supports, and one of these is visible in the photo – to the left of the hood.

I’ve been reading through the revised book by John M. Mills on the Niagara St. Catharines & Toronto Railway, and it’s raised some questions about power distribution for the line. 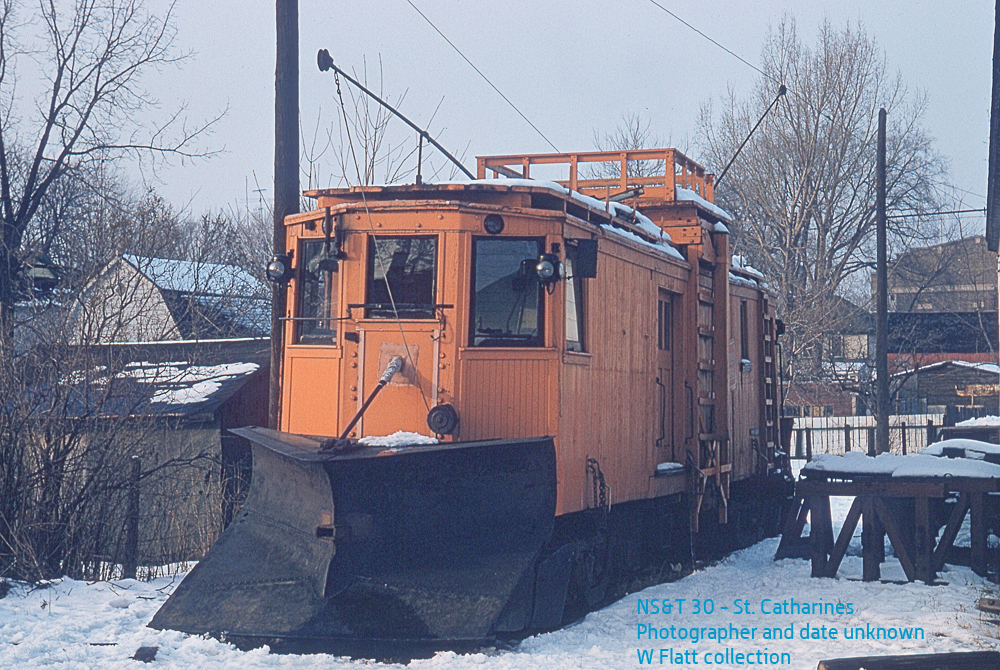 Chapter 12 of the book is a brief look at the power supply. It notes that by the 1950s, the railway had substations in St. Catharines, Thorold, Fonthill, Welland and Humberstone. (The substation in Niagara Falls was closed in 1947, while a substation in Niagara-On-The-Lake was shuttered in the 1930s.)

Most of the photos I’ve seen are of the building in the centre of the wye at Substation Junction, in Thorold. I’ve never seen a photo of the substation in St. Catharines.

I was curious about its location, so I went exploring.

My first theory – which was based on no evidence – was that the St. Catharines substation was located on the north side of Welland Avenue, must east of Court Street. This would place it across the street from the car barns, which backed against that street.

The Louisa Street cutoff comes in from the north to join Welland Avenue here, and there’s a short spur on the north side of the Lousia Street line at this location. Line cars were frequently photographed parked on this spur: an example of that is NS&T 30, shown above. Parking a line car next to the power supply seemed like a natural thing to do, to me…

However, a closer look at the 1923 St. Catharines fire maps shows that’s not the case:

The space I was thinking of is in fact a “supply yard” – which is also a logical place to spot the line cars. The map proves this is not the location of the substation – because a fire map would definitely have such a thing labelled. All that’s listed here is storage buildings. So, I kept looking… 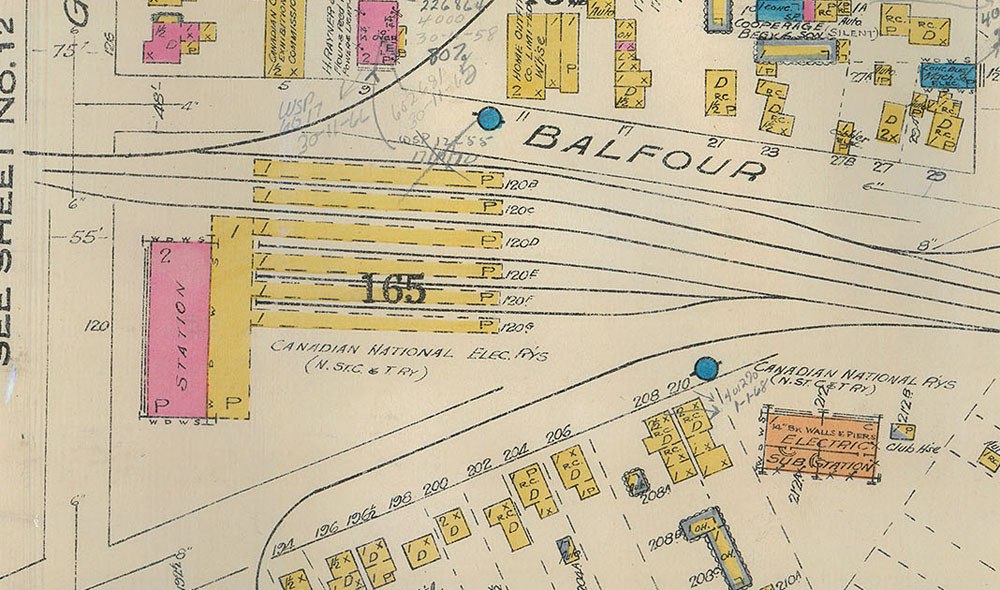 A-ha! There it is – the orange-coloured building in the lower right corner. That places it in the V formed by Welland Avenue and Niagara Street.

Now – does anybody know of any photos of this building?

In addition to its eclectic collection of passenger equipment and freight motors, the NS&T also had some interesting work equipment. As I work my way through the collection of photographs, maps and other materials I’ve recently acquired from William Flatt, I’m enjoying these non-revenue generating but essential pieces. Here’s an example: 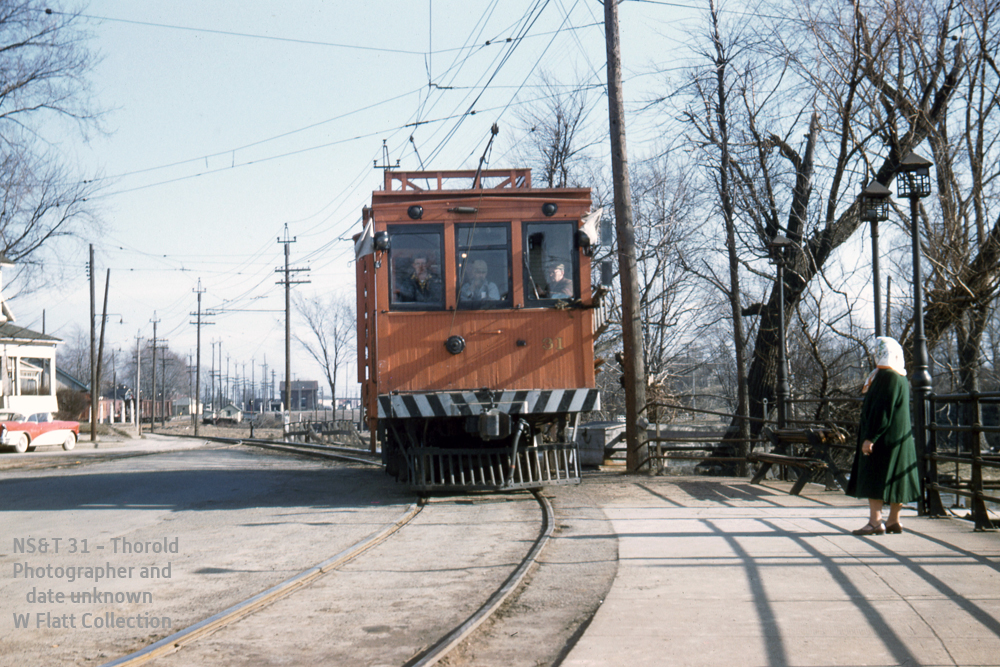 The NS&T had two line cars – 30 and 31. Here’s 31 passing the Thorold station as it works northbound on a late autumn or early spring day.

This image presents a nice overview of the the relationship between the various components that make up the NS&T’s presence in town. The Thorold station is out of view to the left of the photographer: Behind and to the left of the line car – just ahead of the automobile – one can see the switch for the station’s layover spur. At the far left, in the middle distance, a string of boxcars stands in the small yard, while above the front wheel of the automobile, the sloped roof is the NS&T’s Thorold freight house.

A small white shed in the distance is likely a section house, while the large dark building in the distance, just to the left of 31 – is the railway’s substation at Thorold.

The out-of-service second Welland Canal is to the right of the platform. I really like the ornate railing and lamps: While I’m sure the woman standing on the platform would rather see her passenger train than the 31, it appears to be a lovely day to wait for a ride on the NS&T. But it’ll likely turn cooler shortly: The afternoon shadows are quite long…