Back in the day, photographers typically focussed on roster shots: Clean, 3/4 views of equipment. It made sense, given that film was expensive. But it made for pretty static pictures that rarely told a story. Occasionally, however, a static composition would convey life on the line, as in this example – from the collection of photographs, maps and other materials I acquired from William Flatt: 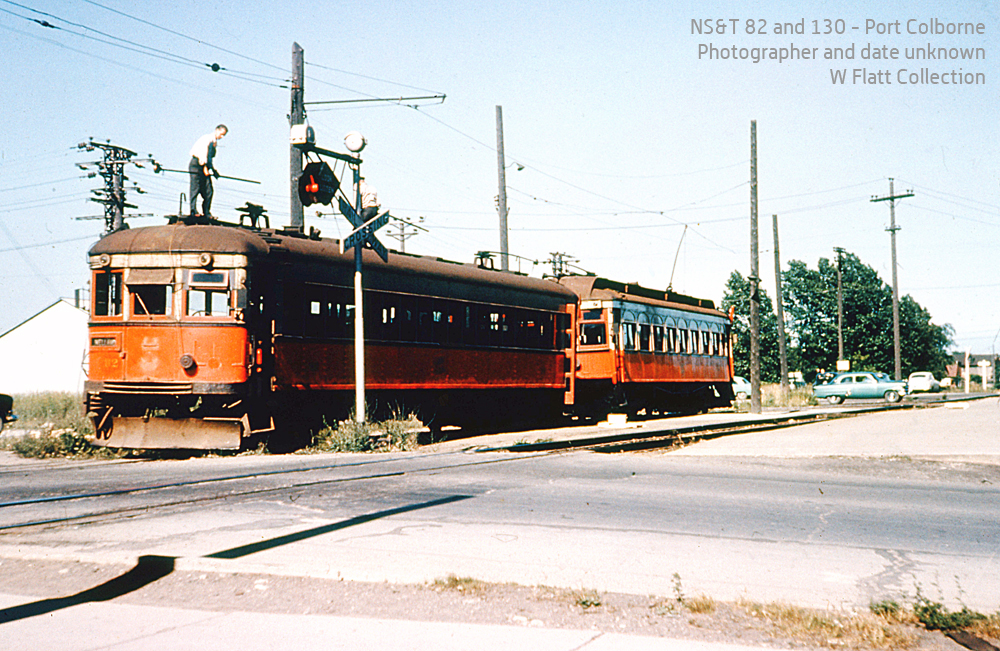 Car 82 is the in-service car and is having its pole changed. (I’m not sure why: Perhaps the wheel failed on it? I’m open to suggestions.) Car 130 is tucked in behind, ready to make the return trip north.

The photographer is standing on the west side of King Street, looking northeast. The track in the foreground is the Canadian National Railways Dunnville Subdivision between Brantford and Fort Erie. The CNR Port Colborne station is out of frame, to the right.

The black automobile to the left of Car 82 is on Princess Street, which then curves behind the cars and turns into West Street before crossing the CNR track, as the turquoise auto is doing.

The Niagara St. Catharines & Toronto Railway had an eclectic collection of equipment, often on display at the car barn – a city block-sized yard on Welland Avenue in St. Catharines. Here’s an example from the collection of photographs, maps and other materials I’ve recently acquired from William Flatt: 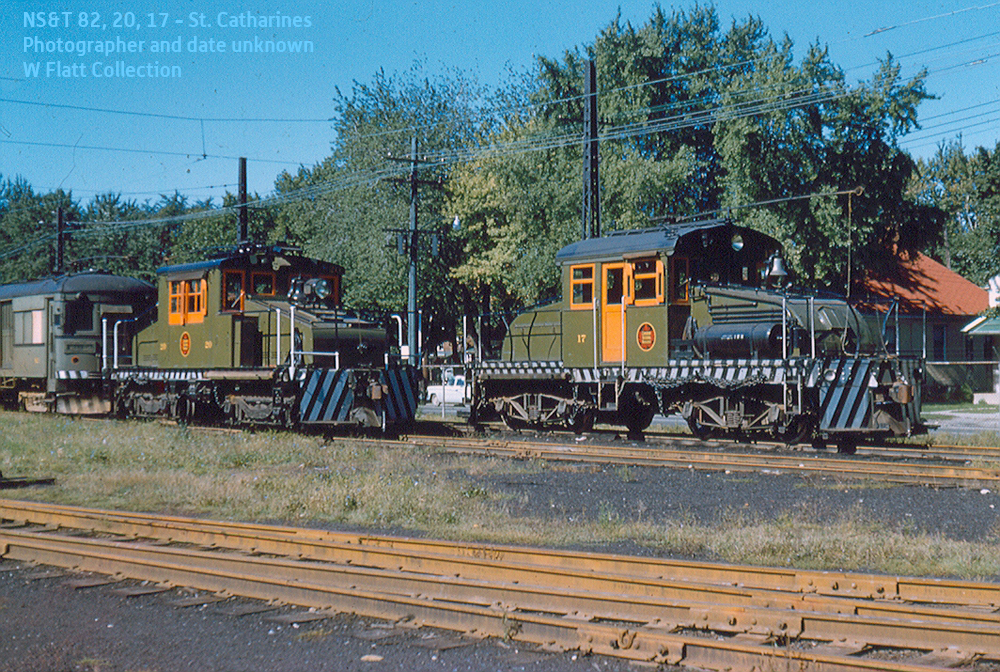 The photographer is standing near the front of the car barn at the east side of the yard, shooting northwest. Welland Avenue is on the other side of the fence, behind the equipment.

I’ve determined that this map conveys a pretty good representation of the trackage and facilities in this yard: 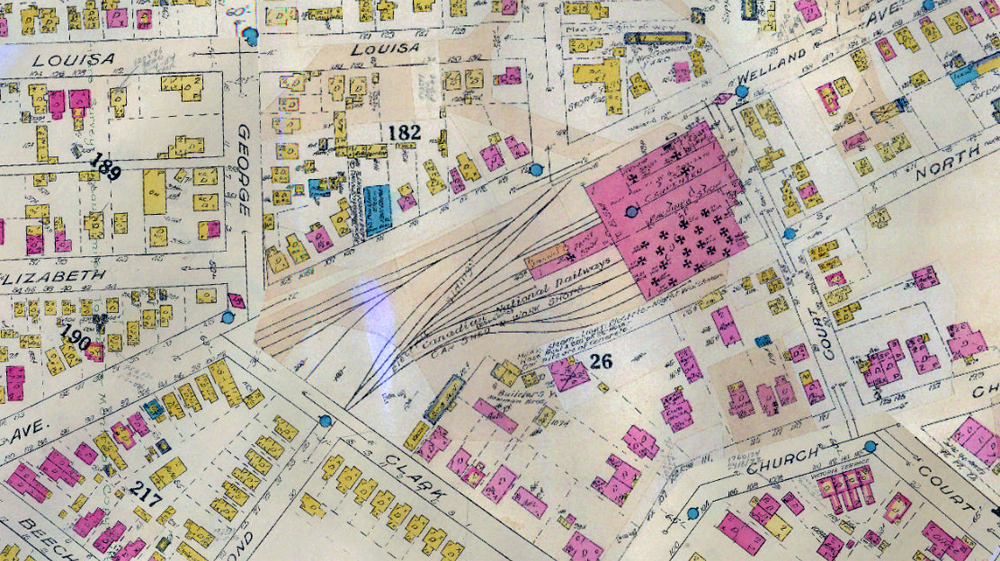 I do like the paint scheme on these three units. While it’s a standard CNR green, the window frames and doors on the freight motors are nicely picked out in orange – and those black and white sills and pilots sure eye-catching.

Number 82 can barely be seen at the left (west) side of the photo. This car was built by the NS&T in 1925, for the Toronto Suburban Railway. It uses a standard underframe designed by CNR for its self-propelled diesel electric rail motors. As built, the car seated 72 passengers, was 61′-9″ long, and weighed 80,000 pounds. Sharp-eyed readers will note it has a baggage door in its side. Car 82 was rebuilt in 1956 as an express motor. It was scrapped in 1959 – so that narrows down the year for this photo.

As mentioned previously on this blog, NS&T 20 was built by General Electric in 1914 as South Brooklyn Railway #6. The NS&T acquired it in 1938 in a trade with a dealer in Toronto. It was a 55-Ton steeple cab, which was scrapped in 1960. A few years ago, I acquired a photo-etched kit for this locomotive designed by William, so it’ll definitely show up on any layout I build.

I also have a photo-etched kit from William for NS&T 17 – a handsome freight motor with pronounced curves on the ends of its hoods, and cab-side doors. Number 17 was a 50-ton freight motor built by National Steel Car in 1918 for the Queenston Power Canal Construction Railway as that line’s number E-9. It was one of two freight motors acquired by the NS&T from the construction railway in 1926 – the other being the NS&T’s second Number 16. While the second 16 was rebuilt with a new cab in 1930, the 17 retained its original configuration. Number 17 was transferred to the CNR’s electric line in Oshawa, Ontario when the NS&T converted to diesel in 1960, and was scrapped in 1964.

As I ponder possible scenes to include on a layout, the Welland Avenue yard and car barn is tempting. That said, if I end up not building a layout (still a possibility), it would make a nice diorama – a great place to display the variety of equipment once owned by the NS&T.