In an earlier post, I shared photos of several Niagara St. Catharines & Toronto Railway passenger cars headed through Woodruffs siding near Ontario Street in St. Catharines. Those cars were on the Port Dalhousie Division, taking people to and from the amusements at Lakeside Park. Here are some photos of the north end of that division, from the collection of photographs, maps and other materials I’ve recently acquired from William Flatt: 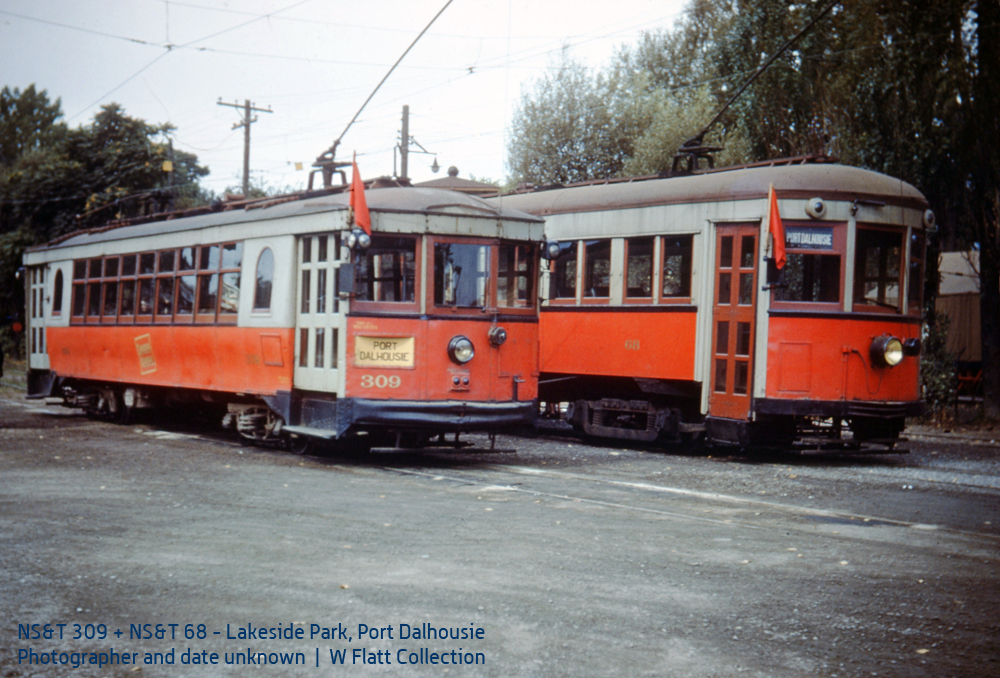 The Port Dalhousie Division was considered part of the St. Catharines local lines – but it presented many challenges to the NS&T. Lakeside Park was popular during beach season, meaning there was heavy seasonal traffic. In addition, a dance hall in Port Dalhousie generated a lot of riders. John Mills notes in his revised book on the NS&T that trains were often run as “doubles” (two cars running close together, on the same schedule), and that during peak Port Dalhousie season, up to six sections could use the same schedule. By 1940, the NS&T decided to run the division using standard railway operating rules, with green flags for advanced sections, white flags for extras, and – of course – red flags or markers bringing up the rear.

NS&T 309 is a Cincinnati car, in the 301-312 series. The presence of Cincinnati cars on this line suggests the photos were taken after 1947, as that’s when they were pressed into service to the Port after the CNR transferred the NS&T’s 320-series cars to Montreal. The Cincinnati cars did not track well on open track work, such as the stretch between Port Dalhousie and Woodruffs, and frequently derailed. The NS&T had better luck with 68 – a Preston product built for the London & Lake Erie in 1908 and acquired by the NS&T in 1920. NS&T 68 was 51 feet long, weighed 34,380 pounds, and sat 54 passengers. 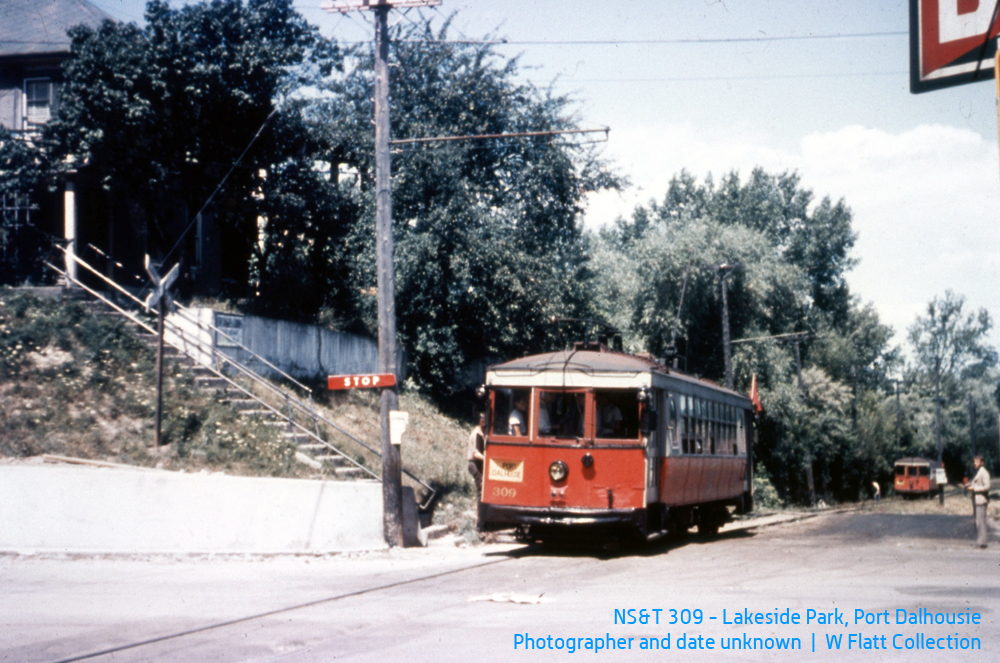 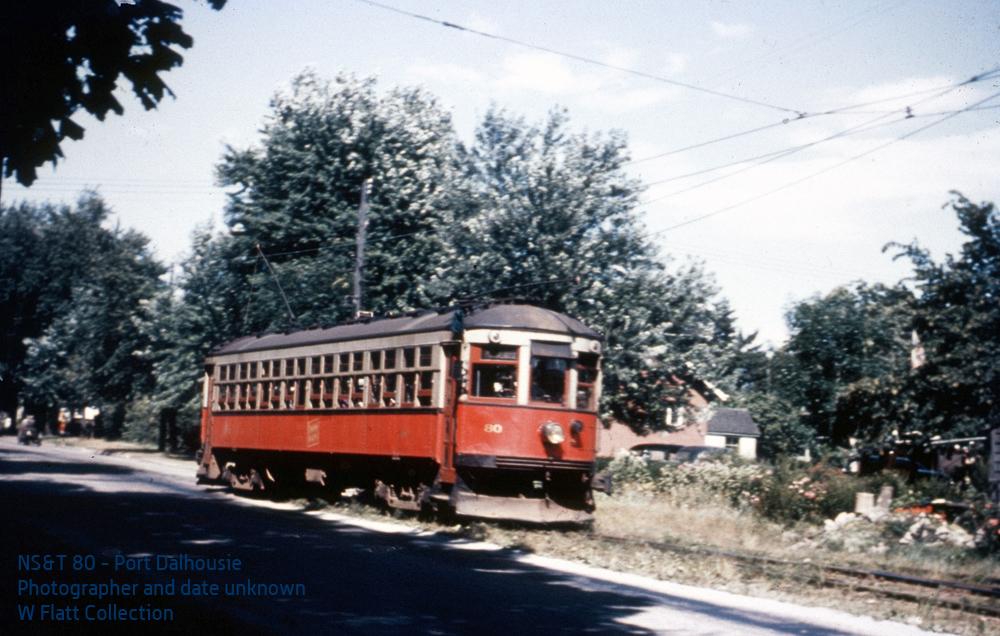 Further along Main Street, NS&T 80 is headed out of the centre of the road and onto private right of way. Here, there was a siding known either as Corbetts or the Canning Factory siding. This was on the southeast side of the road and the start of the siding can just be seen at lower right. 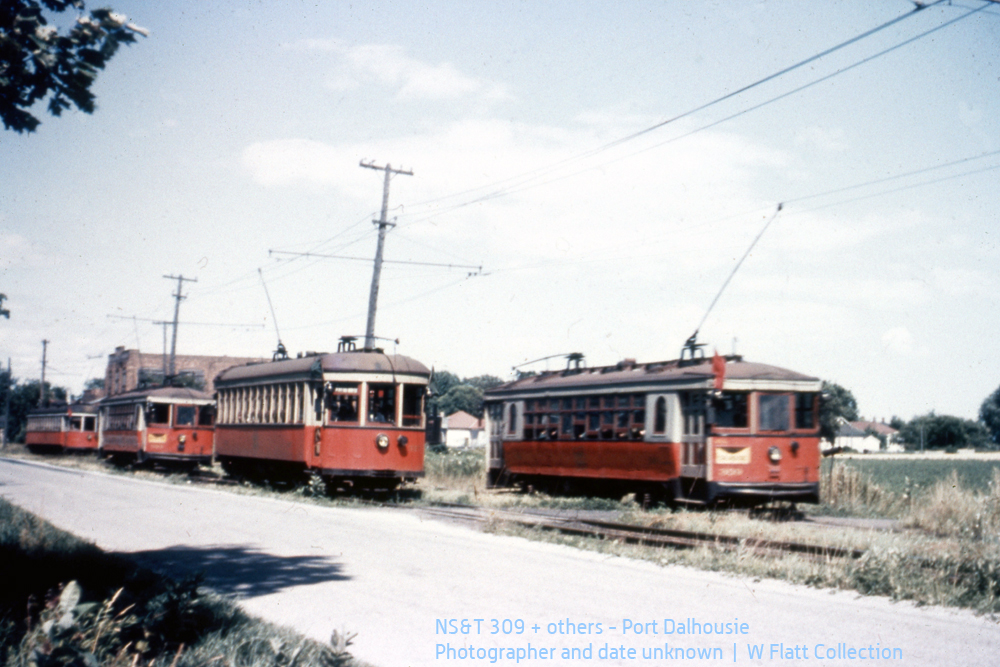 This photo was taken further west on the canning factory siding. Car 309 – at right – is headed towards Lakeside Park in this image. Ahead of it, at the left edge of the photo, is another car heading to the Port. They’re meeting two cars – including a Cincinnati curved side in the 301-312 series – making the return trip to St. Catharines on the track closest to the photographer.

The two cars that are not Cincinnati products could be NS&T 327 and 328. They are known to have covered the Port Dalhousie Division, and they do not appear to have integral classification/marker lights above the end windows.

NS&T 327 and 328 were built by Preston in 1914 for the Edmonton Radial Railway. From there, they went to the Oshawa Railway as that line’s 80 and 81. At some point, the Oshawa Railway converted them into tool sheds – and it could’ve been their fate to rot in place. But World War II placed new pressure on the NS&T, and to satisfy the demand these two cars were acquired from Oshawa in 1943 and returned to active duty with motors and parts from NS&T 62 and 64. They were scrapped in September 1950.

The brown building at the left of the photo, behind Cincinnati car, is the Port Dalhousie Canning Company. According to a history of Canadian Canners Limited by Louise Elder, this factory was built in 1913. It packed strawberries, raspberries, cherries, tomatoes, peaches, pears, plumbs, tomatoes, pumpkins and apples under the “Harbor” and “Harvest” labels. 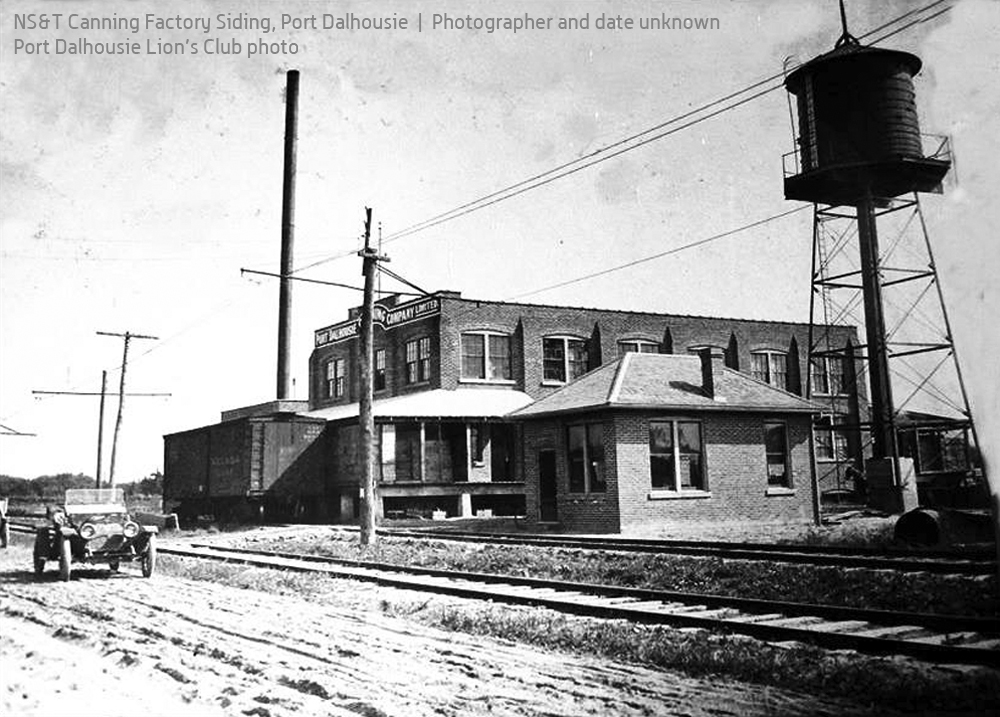 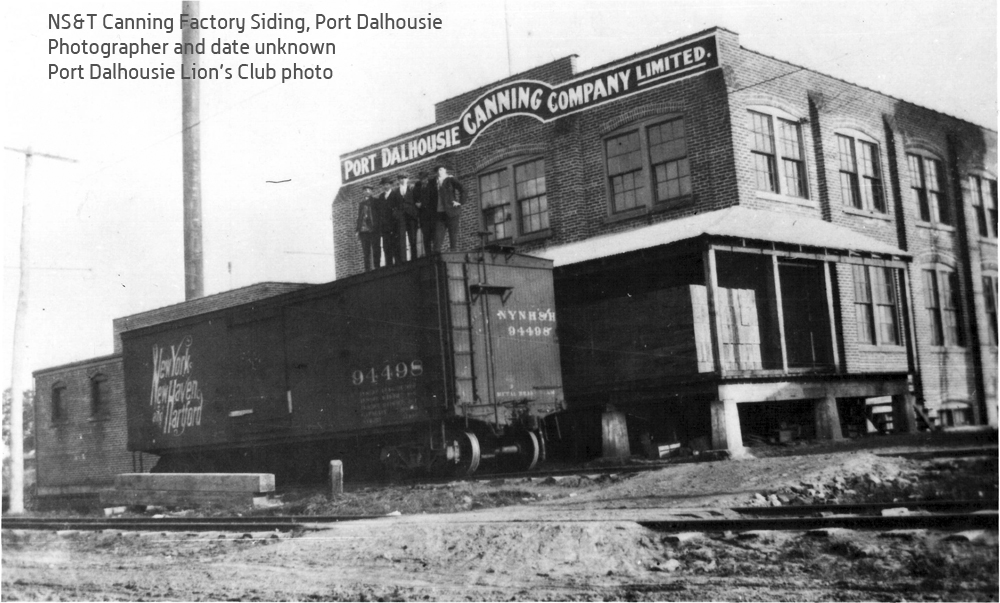 The Port Dalhousie Canning Company was purchased by Dominion Canners Ltd in 1923, but DCL used it only for storage. DCL sold the facility to the Port Dalhousie Lions Club in 1952. The club has since built a new hall at 201 Main Street, the site of the original canning plant.