That’s a really good question – and I just realized that while I have addressed this on my Port Rowan blog, I haven’t written about it here. It’s time to fix that.

The short answer is, I don’t know – yet. The longer answer is, I won’t make the decision until several milestones are achieved.

First – I intend to finish my Port Rowan layout.

I’m so close, it would be unfortunate to not do so. I enjoy my Port Rowan layout but I have no personal connection to the prototype: I chose to model this line for the very practical reason that it fit my layout space. But I think it would be novel to finish a layout in my lifetime.

Second – I need to design a layout that I would actually want to build.

On the plus side, as my Achievable Layouts blog should make clear I’d rather build a simple layout with a few scenes done well, than a lot of scenes overcrowded. My Achievable Layouts philosophy will guide my designs, and I will only undertake an NS&T layout that can be built without becoming an albatross.

On the minus side, when it comes to the NS&T I know the subject matter really, really well.

With previous layouts – including Port Rowan – I was working largely from photographs and maps, and I was able to introduce compromises without them bothering me too much. Over the years, I’ve built many layouts and each has become simpler than the one before it, as I reduce the compromises by picking smaller subjects to model. But even on Port Rowan – which has just eight turnouts in total, and a single train per operating session – compromises were required. Again, they were easy to make because I don’t have a history with the prototype. But the NS&T? Well, I grew up around it.

To provide an example of the challenge, I walked the line along Louisa Street every day to attend high school. The prototype ran for several blocks and crossed one major street (Lake Street) about halfway along. If I decide to model Louisa Street, how long should the street be? How many blocks should I represent? How much can I compress those blocks? At what point does it lose the feel of running along a street?

Here’s another example: I regularly watched CNR crews switch the General Motors plant on Ontario Street. Again, the track went up the middle of the street past the plant to get to the far side. On the prototype, the track runs in Ontario Street for approximately 2,300 feet. Obviously that’s too long to model uncompressed: In S scale, that’s almost 36 actual feet. But how much can I compress that by? I think 15 feet of street running would be fine. But how about 10? At what point would this huge General Motors plant no longer feel like the major industry that it is?

I feel that compressing scenes will be harder in the case of the NS&T than it was for any previous layout I’ve built, because of my familiarity with the prototype. Can I apply enough compression to actually make something fit in my space that will be satisfying to build, fun to operate – and remind me of the real thing? Those are questions I need to answer.

Third – I would have to actually build all of of the kits I’ve acquired for NS&T freight motors – and get them running to my satisfaction.

I can do this – I’m pretty sure I have the skills – but one doesn’t know for sure until they’re built. Until I have these freight motors ready to run there’s no point in considering a new layout. Get the equipment finished first, then address the layout. It worked for Port Rowan, after all.

Fourth – I would have to build some trolley wire and get it working to my satisfaction.

Despite being a traction guy at heart, I’ve never done this. Can I do it? I’d better figure that out before I commit to a layout.

If there’s any part of the Niagara St. Catharines & Toronto Railway that speaks most strongly to me, it’s the operations on Ontario Street in St. Catharines.

I spent my formative teenaged years living just a couple of blocks south of the General Motors plant on Ontario Street, and I would regularly see CNR switch crews working the complex. GM spanned the street, with plants to the east and west. 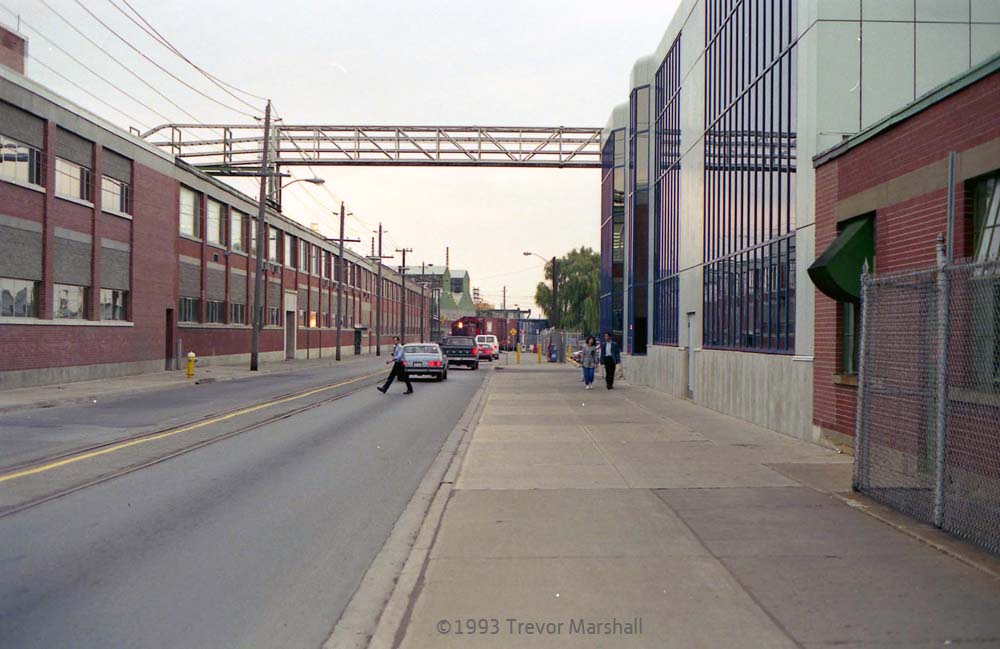 In the distance, a CNR crew with an SW1200RS is returning from switching the east plant of General Motors on Ontario Street. The trains and tracks would disappear in a year or two.

Auto traffic was regularly stopped for in-plant carts and workers on foot. And, at shift change time, by an end-cab switcher shuffling boxcars up and down the street. While locals knew this, and might seek an alternate route, there was always some driver on Ontario Street who would be surprised by a few hundred tons of metal taking over their lane, complete with ringing bell and squealing flanges. For a train-mad teenager, it was delightful.

And for decades it had the same effect on the kids of previous generations – like the one in this view: 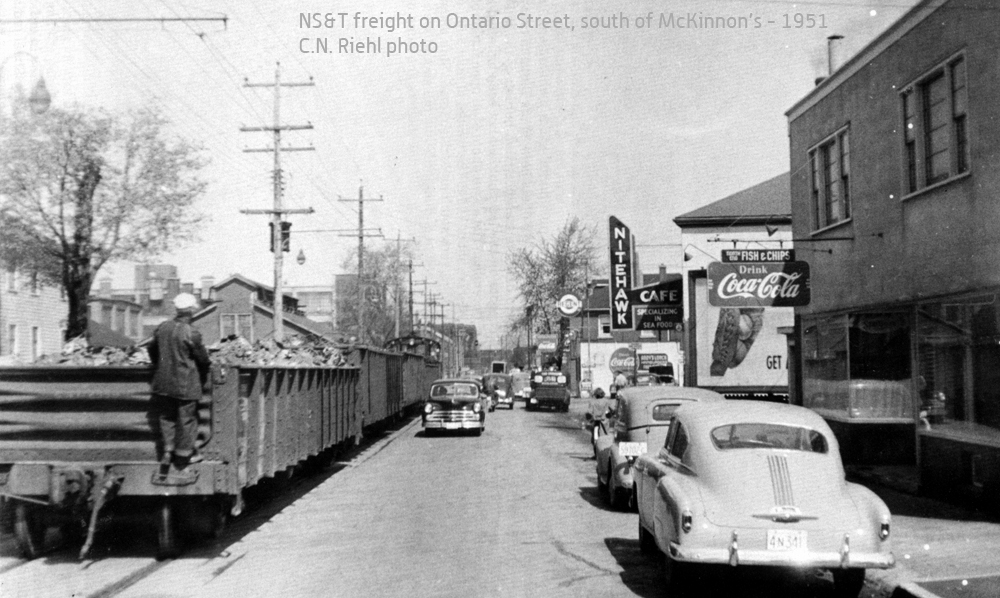 That kid? Look just ahead of the two cars parked on the curb. He’s on a bike, and I know exactly how he feels – because in 25-30 years, that would be me.

There’s so much to explore in this image. McKinnon can be seen on the right, above the second-last gondola. On the east (right) side of the street, a number of small businesses are ready to serve hungry plant workers.

The McKinnon foundry is the tall dark building ahead of the locomotive (over the dark auto that’s driving towards the photographer). Here’s a closer look: 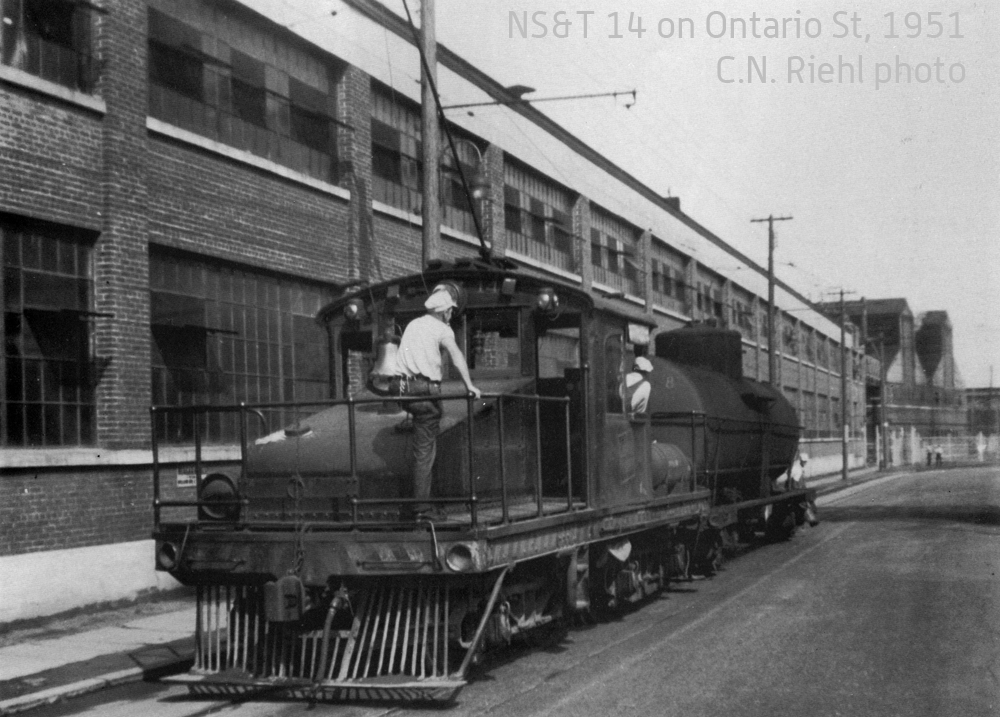 One thing I notice in comparing the two NS&T images to my own photo is that by the time I encountered the CNR on Ontario Street, the track had been relocated from the west side of to the centre. I suspect that was to prevent the additional chaos of having two-way traffic all squeezed into the northbound lanes. A train makes a very effective lane divider.

This large factory has an interesting history, which you can read about on the Vintage Machinery website. Unfortunately, this company – the major employer in St. Catharines for decades – is a shadow of its former self. Here’s what the area looks like today: 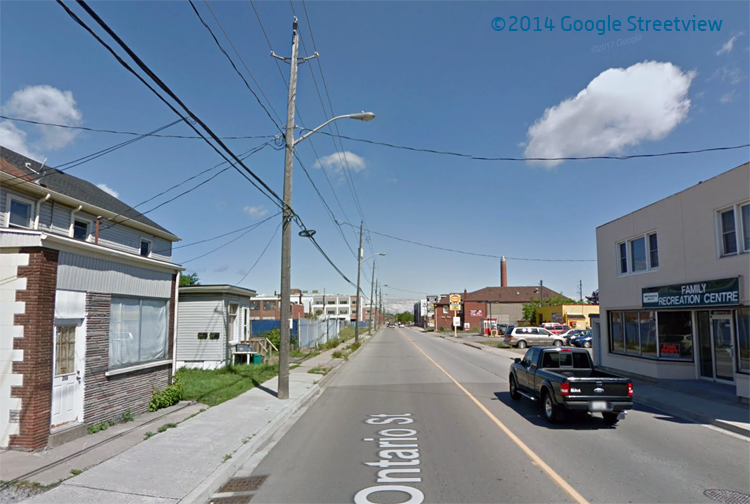 The Family Recreation Centre at right is the building with the Coca-Cola sign in the first Riehl photo. And of course, there are no tracks in the street anymore. Also, no wide-eyed kids on bicycles…

What I did not appreciate when I grew up near the plant was how much busier this area was for the railway back in the NS&T days. The above photos provide some clue to this: I only ever remember seeing boxcars for General Motors, yet here are tanks and gondolas. Consulting various sources, I’ve learned there were more spurs for the GM plant, plus other rail-served industries such as WS Tyler, a coal dealer, and – across 12 Mile Creek – the Welland Vale Company: 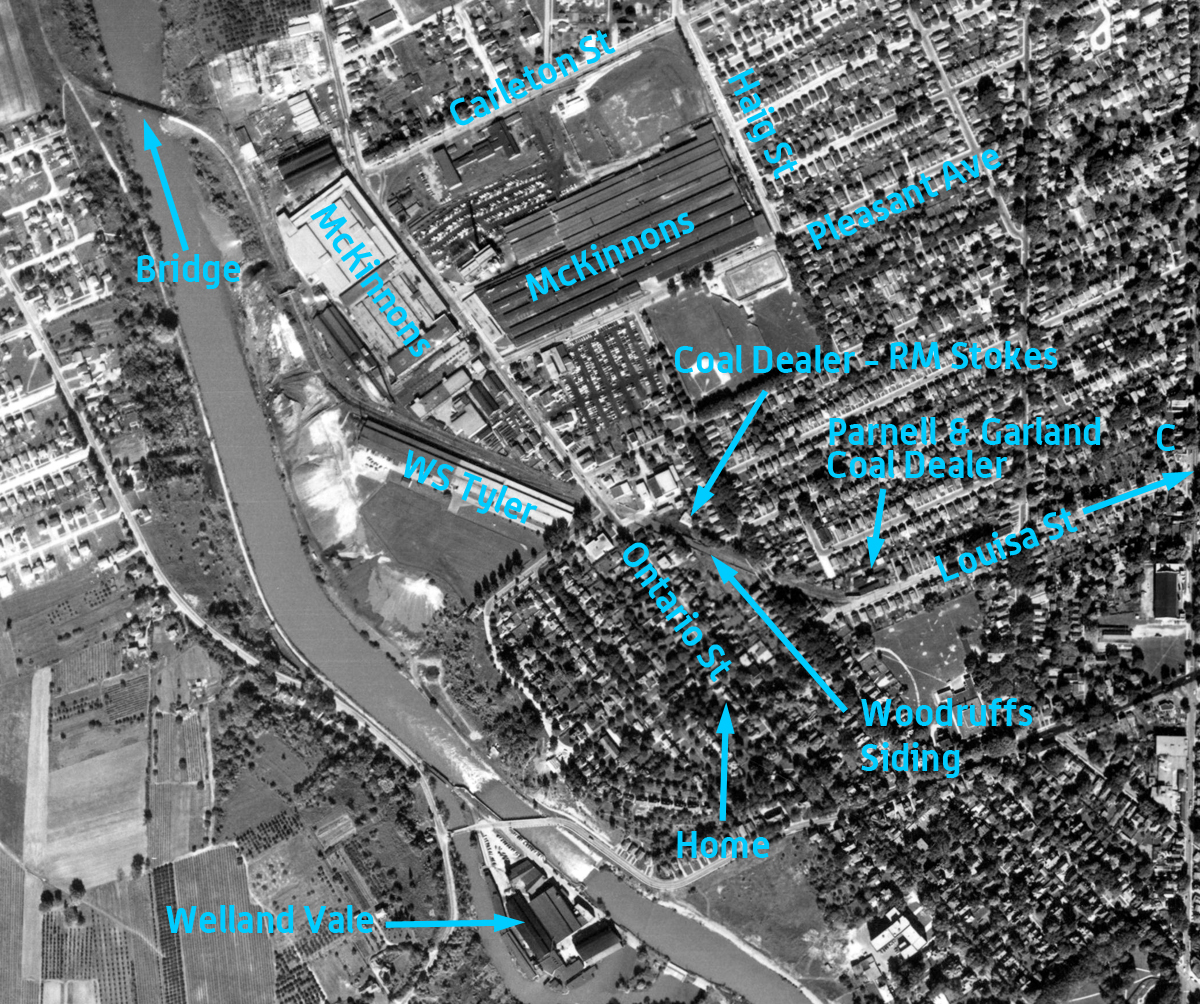 The NS&T line to McKinnon was part of the Port Dalhousie division. It left the terminal area downtown and headed west along Welland Avenue before jogging over to Louisa Street. (I’ll write more about the terminal and about Louisa Street in future posts.) At the Parnell & Garnett coal dealer, the NS&T swung northwest, slipping between houses at an angle to reach Ontario Street. There was a run-around track here called Woodruffs, where passenger trains to and from Port Dalhousie could meet. There was also a spur to the RM Stokes coal dealer.

The main track crossed Ontario Street and slipped behind the west plant of McKinnon. Spurs snuck in behind this plant, and over to WS Tyler. Meantime, the main track dropped downgrade and crossed the creek before continuing on to Port Dalhousie. On the far side of the creek, a switchback paralleled the water to reach Welland Vale.

Back at Woodruffs, a switch took the track into Ontario Street and up to the foundry at Carleton. Zooming in on the original aerial photo shows a spur swinging back into the McKinnon building on the east side of Ontario Street (in the middle of the large structure just above Pleasant Avenue). At Ontario Street, spurs pointing north and west crossed each other to serve the foundry. Meantime, the line turned east, along the south side of Carleton Street and then south alongside Haig Street to a couple of spurs at the back of the east plant.

And if you look just south of my label for Ontario Street, the arrow points to the house I grew up in.

Between the two plants at McKinnon, two coal dealers, WS Tyler, and Welland Vale, there’s a lot of switching potential here. (If I model the era in which passenger service still ran up Ontario Street – crossing the Port Dalhousie line with a level crossing at Woodruffs to join the spur to Carleton – then I could also model the passenger extra trains that delivered and picked up workers. Because yes, McKinnon was large enough to warrant its own, daily, special movements.)

This area is very high on my list of places to model – providing I can fit everything in. The challenge will be, I know the area so well that I may have trouble selectively compressing it. But that’s an exercise for another day. For now, I can enjoy thinking about the possibilities of switching an auto plant – under wire!