In an earlier post, I asked readers for photographs of the Niagara St. Catharines & Toronto Railway freight house in St. Catharines. Thanks to some detective work from Aaron White on the NS&T Facebook group, I now have a couple of images I can share. As a point of reference, I will include the 1923 fire insurance map for this area further down…

The first photo comes from a collection recently acquired by the Niagara Railway Museum: 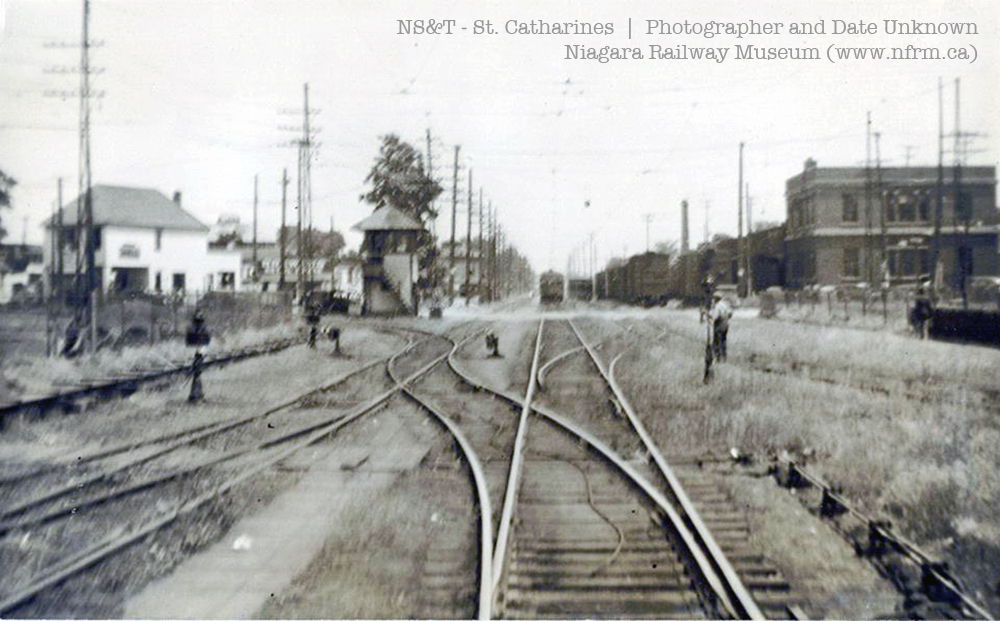 The photographer is obviously using slow film, as the photograph is quite blurred. He’s either aboard a moving train, or paused while crossing Welland Avenue to shoot this photo.

The picture shows the freight house on the right, on the far side of Niagara Street. A freight shed extends behind the brick structure.

To the left of the tracks, a tower controls the interlocking here. This interlocking includes the yard throat in the foreground that leads to the passenger terminal (behind the photographer), the line curving away at right that enters Welland Avenue and heads towards the car barn, and the city line that curves away to the left, onto Niagara Street.

(The Niagara Railway Museum is a great place to spend a bit of time online. Its website hosts a number of photo galleries, including one on the NS&T. Why not have a look… and plan to visit the museum this summer?)

The second photograph is via the St. Catharines Museum & Welland Canals Centre, with permission from Adrian Petry: 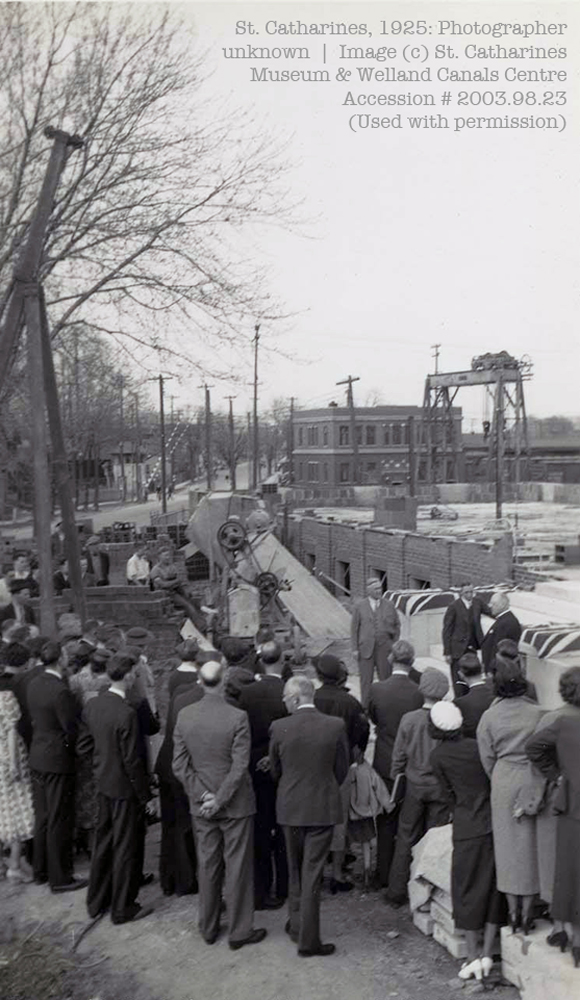 I’ll get to the story of the photograph in a moment – but I want to focus on the freight house itself: the brick building in the background. To the right of the building, one can see some boxcars standing in front of the freight shed that extends from the back of the brick structure. And of course, there’s that overhead crane – which is part of the team yard adjacent to the freight house.

Here’s the story of the second photograph, from the St. Catharines Museum’s Facebook page…

Early versions of fasteners were developed and patented in the United States, most notably in 1851 by Elias Howe and in 1893/1905 by Whitcomb L. Judson. However, it was the Swedish-American Gideon Sundback (photo upper right, facing left), who is credited as the “Inventor of the Zipper.” He not only designed the first successful slide fastener (later referred to as the modern zipper), with a system of interlocking teeth and scoops, but also developed a machine in 1913, later improved upon, for mass-producing his invention.

(The museum has a lot of great information available. In addition to its Facebook page, you can find the museum on Twitter and Instagram by using @stcmuseum. Enjoy if you visit!)

As promised, here’s a map of the area. The green arrow points to the freight house / shed. As the photographs and map show, there are spurs on both sides of the structure.

I’m excited by these two photographs because they confirm what I remember of the freight house, from seeing it as a young railfan back in the 1980s. I’m equally excited that there’s a decent stand-in model available for this freight house in S scale – thanks to my friend Barry Silverthorn, no less.

Before he launched TrainMasters TV, Barry ran Grand River Models, which produced a handful of delightful craftsman structure kits in 1:64 – including the Prince Edward Express Company: 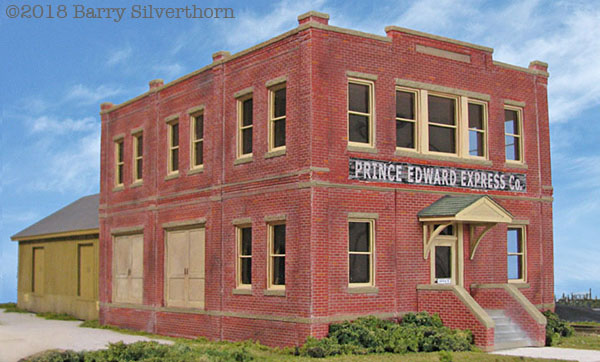 No, it’s not an exact model. But yes, it’s darned close. And I happen to have one, plus a couple of extra freight shed extensions that I can use to lengthen the structure.

The Niagara St. yards are looking like a better modelling subject all the time!

The first is the NS&T’s freight shed on Niagara Street. It’s indicated by the arrow in this map:

I believe this building was later part of a lumber yard in this location, but I can’t remember. If you have more info, I’d love to hear from you.

The second is the NS&T’s substation / power house across Welland Avenue from the terminal. It’s indicated by the arrow in this map:

On the off chance that you stumble across this blog and you have photo of one or both of these buildings – in any era – please let me know via the comments. Thanks in advance!

It’s spread across five pages, but you can start with the first page (including links to all the others) by clicking on this terrific image of a pair of NS&T 130-series wooden interurbans in boat train service:

Enjoy if you visit!

Here’s a terrific find – a 1913 system map of the Niagara St. Catharines & Toronto Railway and its connections, including its boat operation across Lake Ontario: 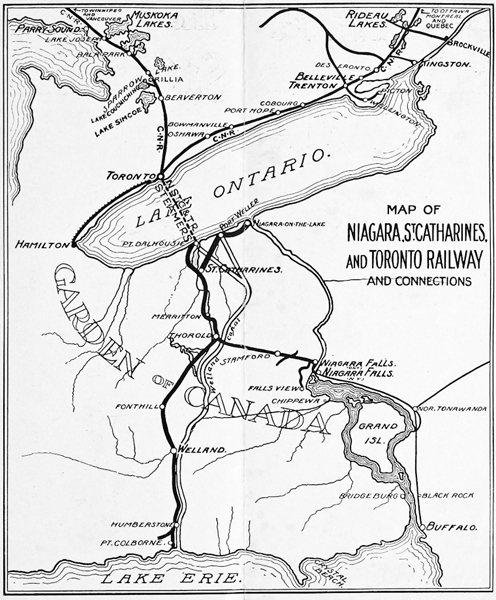 For those unfamiliar with the railway, this map (from a brochure) will provide some context for posts elsewhere on this site.

The photograph below is a pretty exciting one for me. It changes how I’m thinking about my potential model railway, based on the Niagara St. Catharines & Toronto Railway. 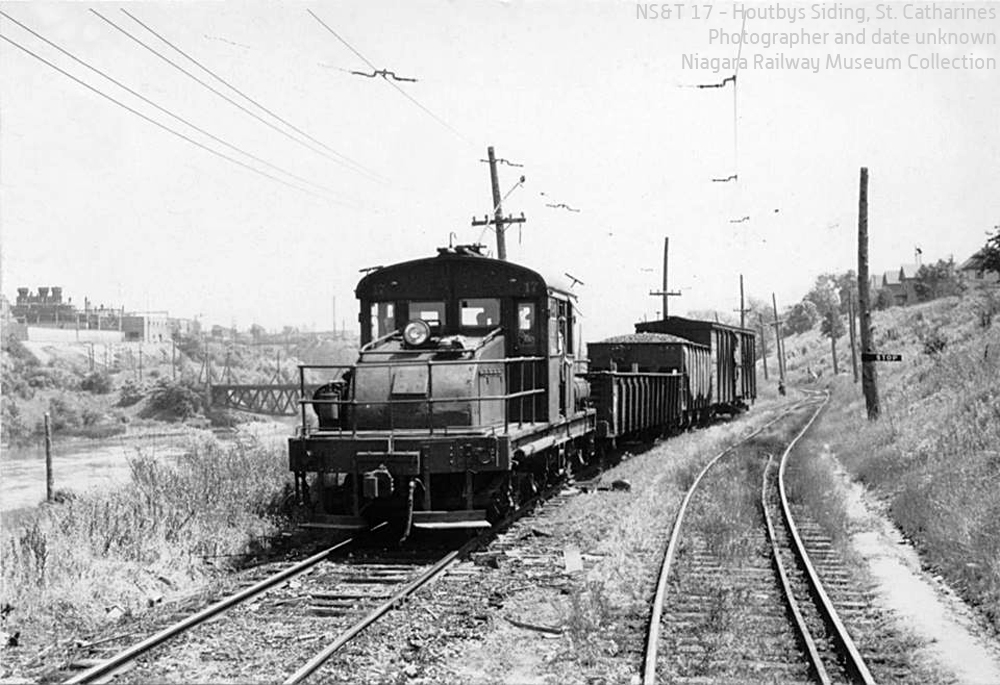 This photo is courtesy of the Niagara Railway Museum, which recently acquired a large collection of photographs. I’m grateful to Aaron White for giving me permission to share it here.

Number 17 and its short freight are in the hole at Houtby’s – at Milepost 2.33 on the Port Dalhousie line. It’s facing north, but it’s likely waiting to back south along the west side of 12 Mile Creek to serve customer(s) at Welland Vale.

To the left of the freight motor, one can see the bridge over 12 Mile Creek and – to the left of that, up the hill – the back of the McKinnon Industries complex on Ontario Street. 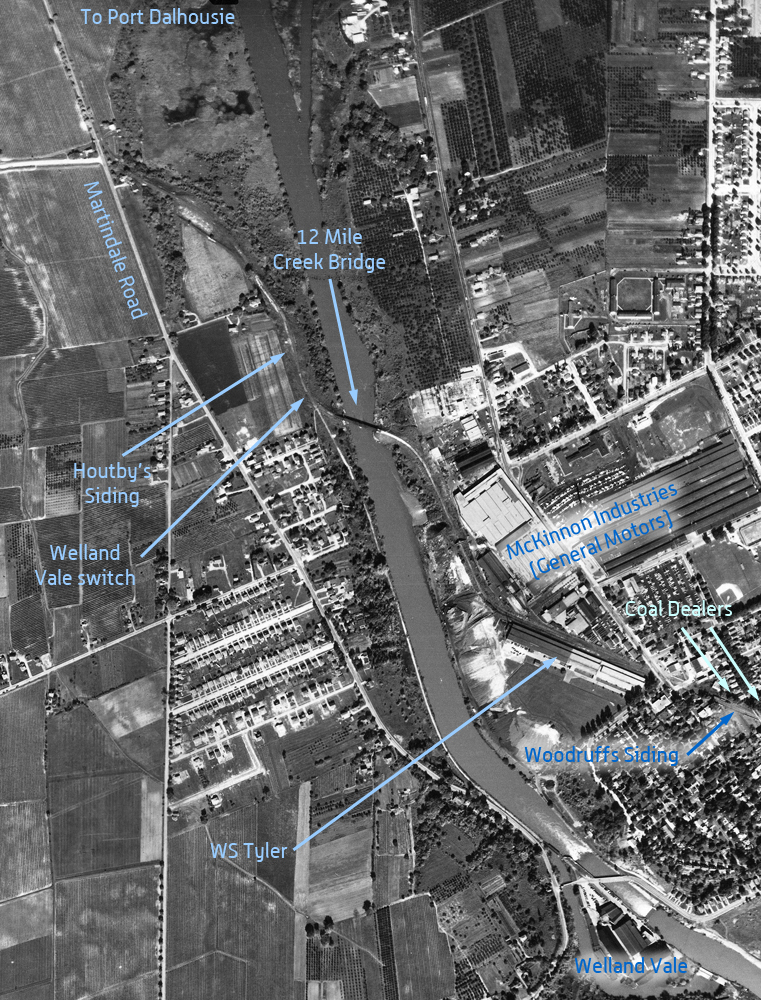 I’m thrilled to have seen this photo because it provides me with an example of the traffic that was hauled across the creek to the west bank. I am very keen on modelling the operations along Ontario Street, but was worried that McKinnon Industries would dominate the freight movements. This photo gave me reason to explore more of the freight workings on the Port Dalhousie division – perhaps I could add Welland Vale to a layout to boost the switching opportunities?

My reprint of the 1945 Employee Time Table includes a list of tracks outside yard limits on the Port Dalhousie Division, which is helpful in determining switching opportunities on this line:

(Note the mileage is measured from Port Dalhousie in this time table, so the MP given for Houtby’s is different.)

I like that the line also includes a couple of team tracks and canneries. (I wrote about the Canadian Canners spur at MP 0.86 and the Cannery Siding at MP 0.99 in an earlier post on Port Dalhousie and Lakeside Park.) Looking at the sidings chart above – and keeping in mind that the Port Dalhousie Division was a busy passenger line until about 1950 – has given me a lot more to think about.

Thanks to Hugh Jordan on the Niagara St. Catharines & Toronto Railway Facebook Group for pointing out that noted Canadian railway photographer Robert Sandusky wrote a sweet capsule history of the railway for the Bytown Railway Society’s Branchline magazine back in April, 2009.

The PDF of the issue is available for free online. The four-page article – which includes an NS&T system map – begins on page 18. Click on this image from the article to start reading, and discover the meaning of this post’s title… 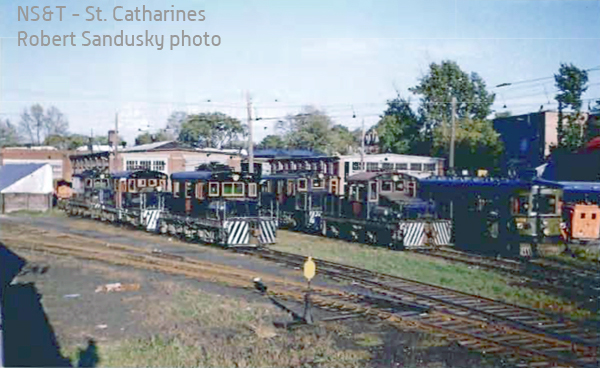 Enjoy if you visit!

(UPDATE: I’m told this link may not work for everyone. Sorry about that – it’s beyond my control.)

I recently learned from noted Canadian railway historian Ralph Beaumont that the National Archives of Canada has – amongst its large collection of vintage railway photographs – many that show early scenes from the Niagara St. Catharines & Toronto Railway. Here’s a small sampling: 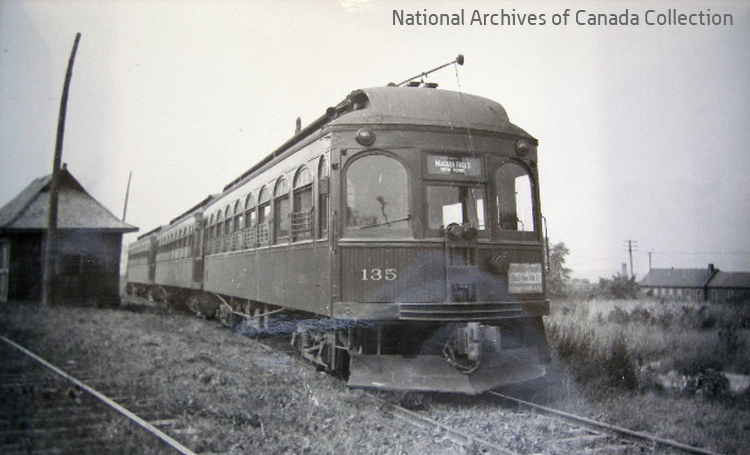 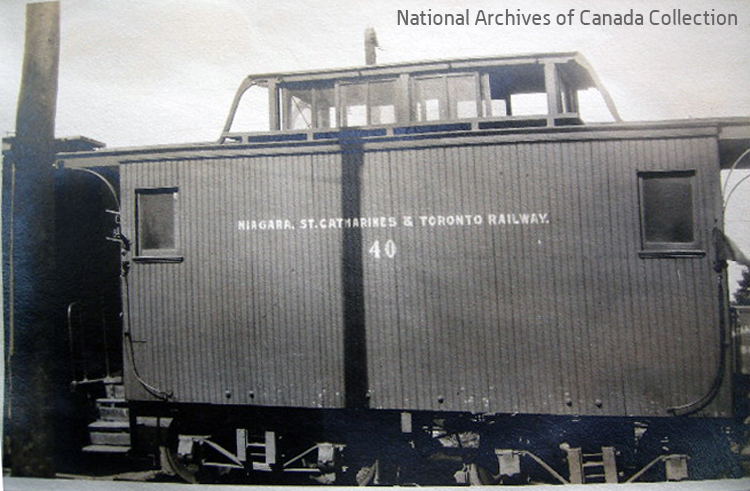 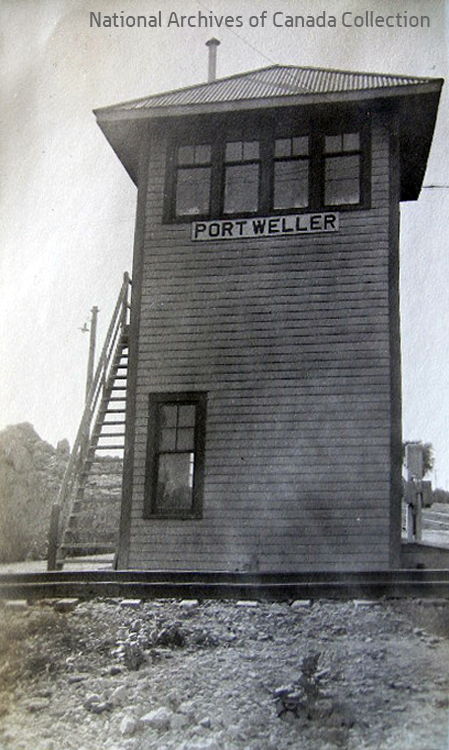 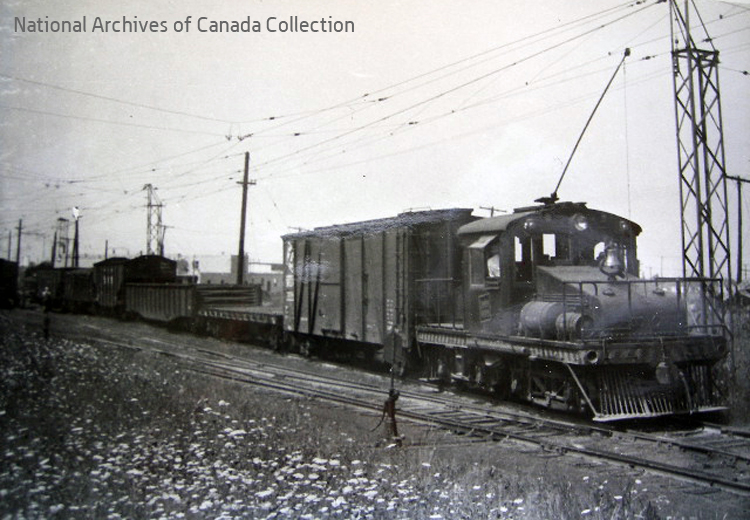 The photos tend to be from an era well before what I would model. But still, it’s a valuable collection that I would love to explore. Clearly, a road trip is in order!