On this blog, I’ve shared many images of Niagara St. Catharines & Toronto Railway number 83. It was a popular interurban car for excursion service. This time, I have one of my favourite photos of this car – found among the collection of photographs, maps and other materials I’ve recently acquired from William Flatt: 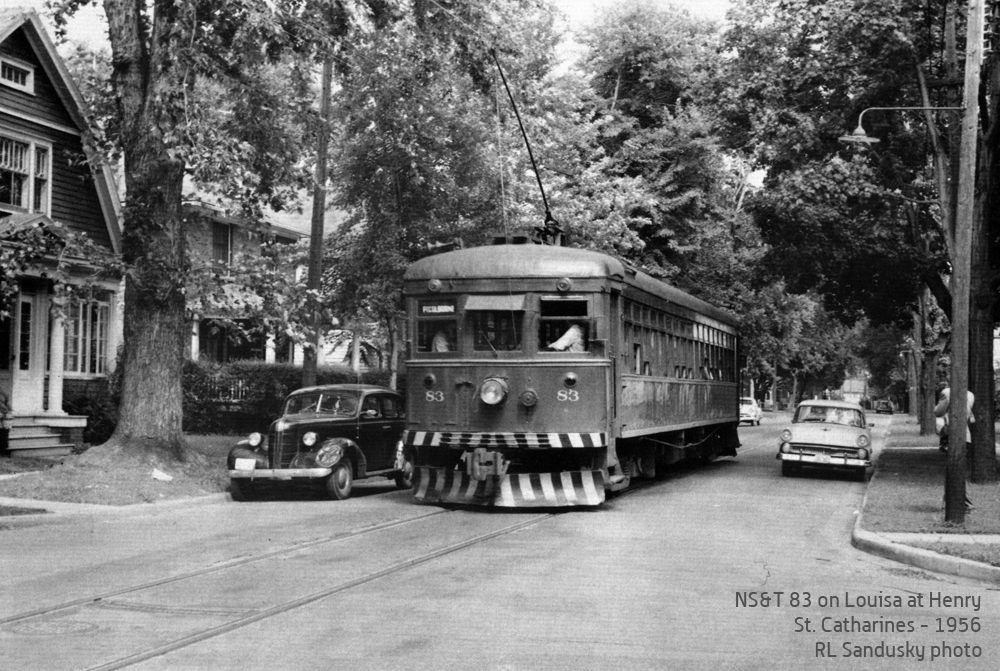 Here, NS&T car 83 is headed eastbound on Louisa Street at Henry Street, on – you guessed it – a fan trip. It’s returning from Port Dalhousie and is a few minutes east of the bridge at 12 Mile Creek, and the siding at Woodruffs.

I was certain I’d shared this photo before, but I can’t find the post. No matter – it’s worth sharing again. I love the combination of big interurban car on a tree-lined residential street. And as I’ve mentioned previously on this site, I used to walk Louisa Street to get to high school. Granted, that was three decades after this photo was taken, but at the time the track still existed, and still hosted short CNR trains moving freight cars to and from the General Motors (nee, McKinnon Industries) plant on Ontario Street.

In the above image, Google Street View cameras have captured the same location in 2014. The track is long gone by this point. But the houses haven’t changed all that much over the intervening decades.

The personal connection with trains in the pavement at this location means I would love to be able to include a segment of Louisa Street running on any NS&T layout I build.