I’m working my way through the collection of photographs, maps and other materials I’ve recently acquired from William Flatt – and I thought I’d share some of the images that speak strongly to me about the Niagara St. Catharines & Toronto Railway. In yesterday’s post, I shared an image of NS&T freight motor 16. Here’s another one: 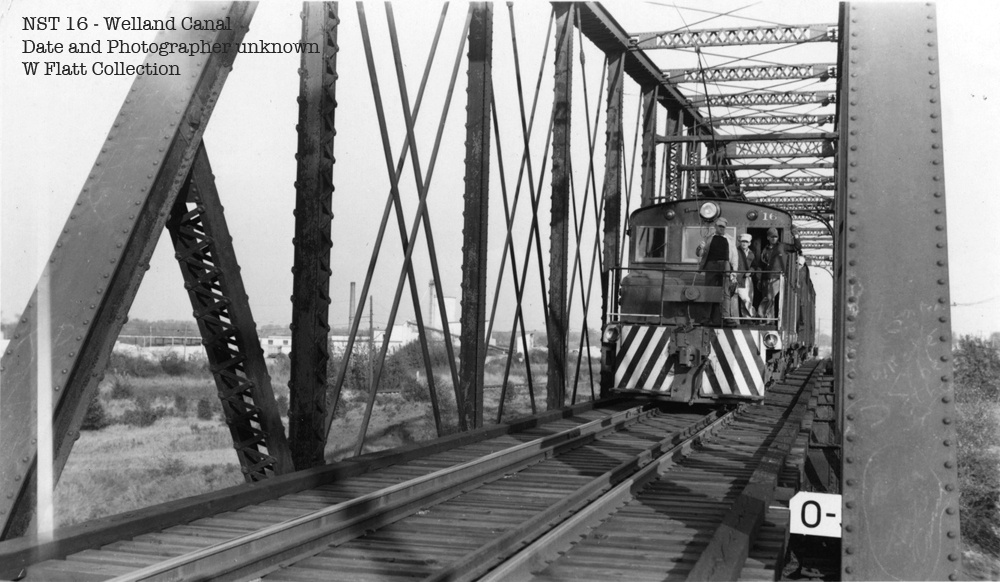 NS&T 16 and train cross the bridge over the Welland Canal at Thorold, Ontario – Date and photographer unknown.

This train is on the Main Line that connected Port Dalhousie to Niagara Falls. Given the shadows, we’re facing east, and the rail line on the far bank (barely visible just to the left of the locomotive pilot, though the bridge) is the spur north off the Main Line to Walker’s Quarry. The Main Line was cut back to Shriner’s (just east of the Welland Canal) in April 1948 – seven months after the NS&T’s rail passenger service ended to the Honeymoon Capital Of The World. Walker’s Quarry – mentioned in yesterday’s post – would become the easternmost customer on the Main Line and continue to receive rail service until this bridge was removed in 1964.

That said, it’s hard to tell what freight cars this crew is working. They appear too tall to be CNR GS gondolas, as seen in yesterday’s picture – and too tall for hopper cars. If they’re boxcars, I’m not sure what they’d be doing east of the canal…