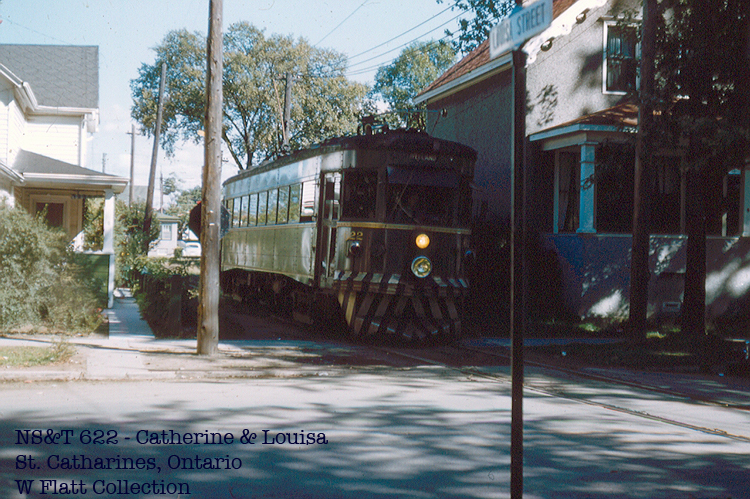 The 622 was a 50-seat interurban built by the Ottawa car company in 1930 and acquired from the Montreal & Southern Counties – another CNR electric operation – in 1956. This series were the most modern cars ever to grace the NS&T, and all were scrapped in 1959. It’s barely visible, but the 622 has a CNR Maple Leaf on its flank.

The train is headed westbound and while it’s not flying extra flags, I’m sure it’s in excursion service. It has just come off Welland Avenue and skirted through an S-curve that brings it to Louisa Street. The cross-street here is Catherine (with an “e”, unlike St. Catharines, with an “a”). Catherine Street is important to me because that’s the street on which my high school was located. I would walk Louisa Street twice a day, Monday to Friday, during the school year. I would often meet a train on my walk – although by the time I went to high school, this was a freight-only, CNR line servicing the General Motors plant on Ontario Street.

There’s not much space between the houses here. On a layout, it would be an ideal, and very prototypical, way to have trains exit the scene to staging…