I’m working my way through the collection of photographs, maps and other materials I’ve recently acquired from William Flatt – and I thought I’d share some of the images that speak strongly to me about the Niagara St. Catharines & Toronto Railway. In yesterday’s post, I shared a photo of a railfan excursion. Here’s another railfan trip, with a different car: 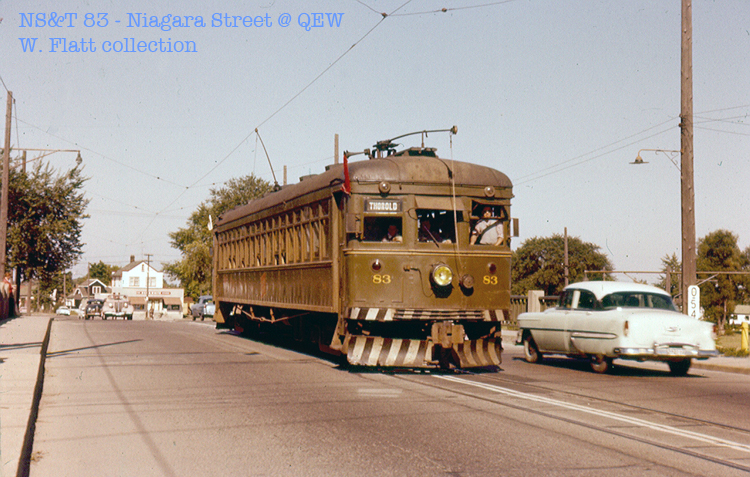 NS&T 83 on Niagara Street at the QEW, St. Catharines – date and photographer unknown.

There’s a good chance this image was taken July 29, 1956 – because there’s a black and white photo taken at roughly the same location in “Niagara, St. Catharines & Toronto Electric Railway in Pictures” by Andrew Panko and Peter Bowen – one of four books on the NS&T in my collection.

The car is returning from a railfan trip to Port Weller, at the Lake Ontario end of the Welland Canal. It has just come off the bridge over the Queen Elizabeth Way – the major highway between Toronto and the Niagara Region, and named after Elizabeth Angela Marguerite Bowes-Lyon (better known as The Queen Mother). The railing on the highway bridge can be seen between the 83 and the automobile to the right of it.

The buildings in the background are at a three-way intersection of Niagara, Vine and Facer Streets – which is the location of Duff’s Pizzeria. I used to go there with friends from high school some 30 years ago. More recently, I’ve had lunch at Duff’s with my friend and fellow railway modeller, Bob Fallowfield, who lives nearby. The place has not changed. Not one bit.