I’m working my way through the collection of photographs, maps and other materials I’ve recently acquired from William Flatt – and I thought I’d share some of the images that speak strongly to me about the Niagara St. Catharines & Toronto Railway. In yesterday’s post, I shared a photo of NS&T 83 on a railfan excursion. Here’s another photo of this car in railfan service: 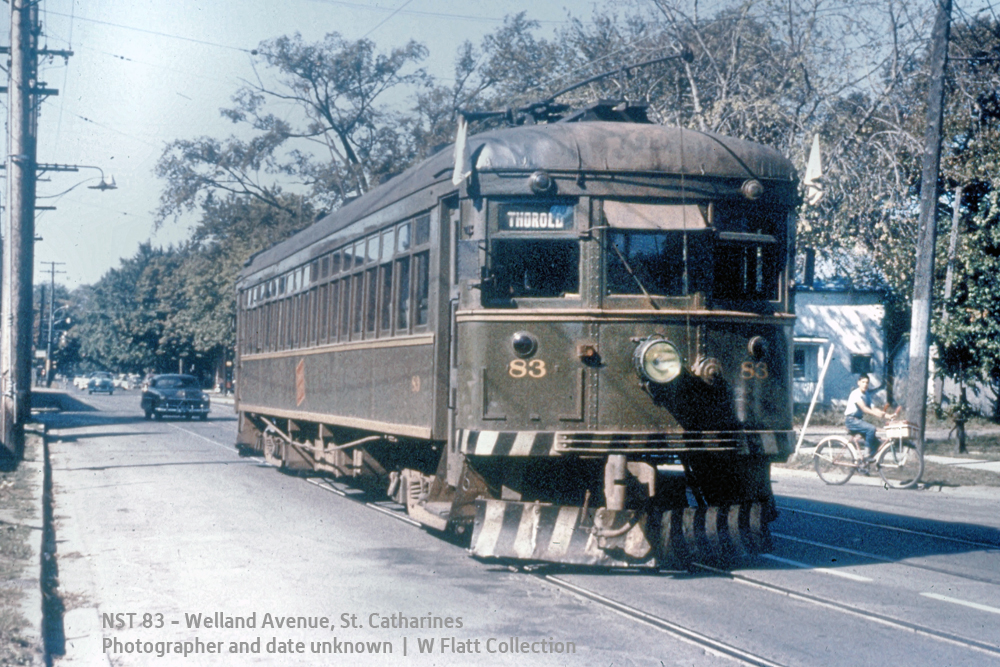 There’s a lot to like about this photo. For starters, there’s the 83. It’s a handsome car – one that bridges the ears between the wooden heavyweights such as the NS&T 130-series and the modern steel cars of the 620-series. (I’ve written about examples from both of those series in previous postings. You can use the “categories” tool on the right side of the home page to find them.)

The NS&T built Car 83 (as well as the second car to carry the number 82) in 1925. It had 72 seats and weighed 80,000 pounds. Interestingly, the NS&T built 83 not for itself, but for the Toronto Suburban Railway as that line’s number 107. The car came home to the NS&T in 1935 and was stored out of service. That changed with the demands placed on public transit by World War II. The car entered service on the NS&T in 1943, on trucks salvaged from NS&T Car 80 and 600-volt electrical equipment out of Car 133.

The revised and expanded NS&T book by John M. Mills notes cars 82 and 83 were built on CNR under frames designed for their oil electric cars. Those cars had end doors for multiple-unit operation, which accounts for the flat faces of 82 and 83.

Beyond Car 83, there’s a lot of note in this photo. The kid on the bicycle is a nice detail. Not also the presence of what appears to be a switch stand on the far side of the sidewalk, to the right of the kid. I was intrigued by this so I went looking in my collection and found another photo of 83 in the same location – probably taken the same day: 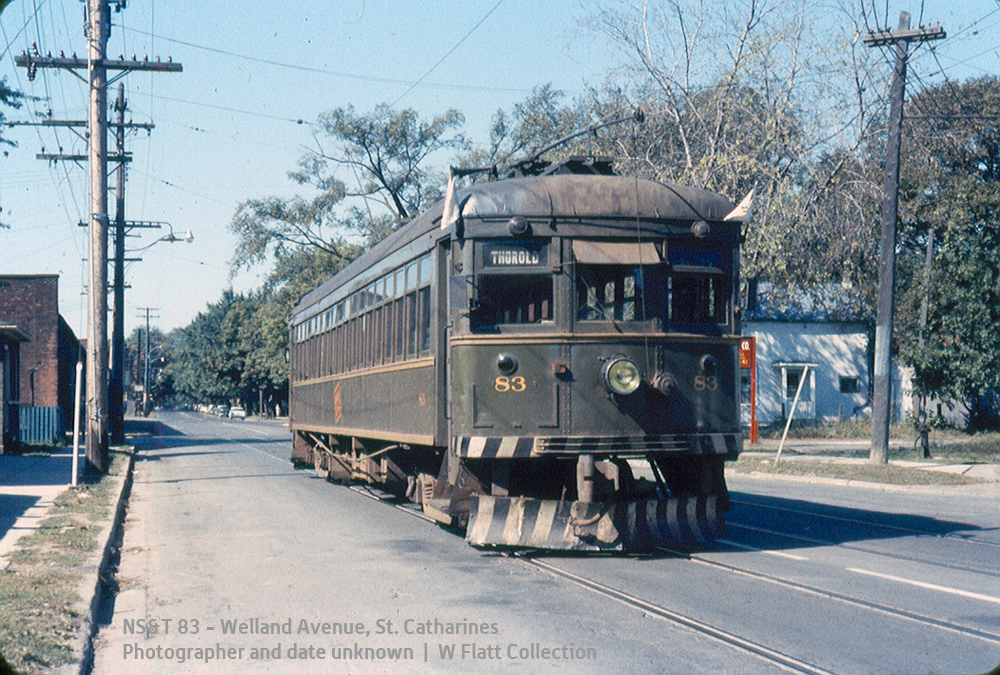 Yep – it’s definitely a switch stand! But for what track? I went looking for more info in the Mills book referenced above. Here’s what I found:

Based on this, I’ve decided the house is at 133 Welland Avenue – directly across from Court Street. Look carefully, and one can see the stop sign at the end of Court Street at the left – in front of the large square brick wall. That wall is the east end of the NS&T car barn.

The Louisa Street cutoff leaves Welland Avenue to the east (right) of this photo, and the track passes through the trees behind the white house. And the switch stand? That’s for the line car siding. This siding was gone when I first encountered the former NS&T in the 1980s. It’s nice to discover the system had a special siding for line cars, back in the day: on a layout, it would make a great place to display some funky equipment.