I’m working my way through the collection of photographs, maps and other materials I’ve recently acquired from William Flatt – and I thought I’d share some of the images that speak strongly to me about the Niagara St. Catharines & Toronto Railway. In yesterday’s post, I shared a photo of Car 83 on Welland Avenue. In that picture, the photographer was looking west. Here’s another photo, taken a bit further east on Welland Avenue, and looking east: 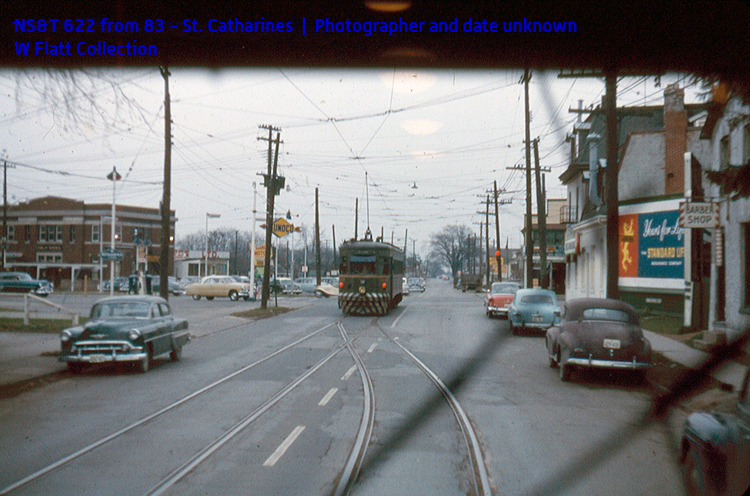 Here, the photographer is riding inside NS&T 83, and has captured car 623 as it heads east on Welland towards Geneva Street. This is a typical street scene in St. Catharines at the time.

The brown building at left is the NS&T’s main terminal. Built in the 1920s, it had several tracks and used to be surrounded by stately trees, as shown in this earlier photograph that I shared. Obviously, this is taken later in the year – there are trees in the distance that are bare of leaf, and it has the greyness that suggests autumn. But it’s also clear that many of the trees around the terminal were gone by the time this photo was taken.

This railfan excursion likely occurred well after the NS&T ceased offering regular passenger service in St. Catharines. Note that part of the property along Welland Avenue behind the terminal is occupied by a car dealership. (I don’t know whether any of the platform tracks are still in place at this point.)

Still, there are many ideas in this photo that can be enacted on a layout – including the many signs (from the Sunoco gas sign, to the billboard, to the small “barber shop” sign with barber pole at the right edge of the image). There’s a great selection of automobile colours on display, too.

But it also gives me ideas about what I don’t want in a layout. Late fall can be an interesting season to model – but not in the city. It’s too drab. And tress in leaf can be used as view blocks. So that’s something to consider.

All in all, an interesting photo.

(EDIT – Nov 1, 2019: Looking at other photographs, I believe the subject of this photo is NS&T 623. I mis-identified it when I initially posted this. I’ve updated the post, but the caption on the photo is incorrect.)