I’m working my way through the collection of photographs, maps and other materials I’ve recently acquired from William Flatt – and I thought I’d share some of the images that speak strongly to me about the Niagara St. Catharines & Toronto Railway. Here’s one that doesn’t even have a train in it – but is a feature I’d love to model: 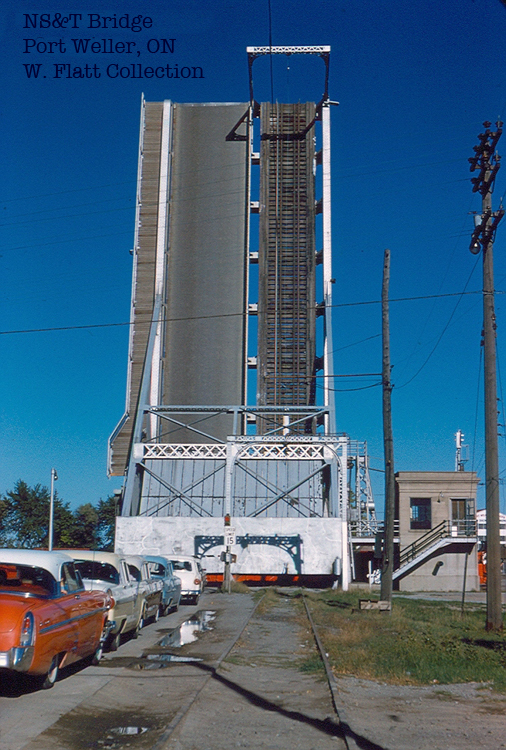 This marvellous bascule bridge spans the Welland Canal at Port Weller (now part of St. Catharines, at the Lake Ontario shore). We’re looking east and from left to right, it carries a sidewalk, Lakeshore Road, and the NS&T – including, of course, its overhead trolley wire.

(I do not have a date for this photo, but it’s possible that it was taken July 29, 1956. On that day, a railfan excursion in Car 83 included a trip to Port Weller in hopes of crossing the bridge. But when the fantrip arrived, the bridge was up for a passing ship, and a tight schedule meant there was no time to wait for the ship to clear and the bridge to close. This is just speculation, but it’s as good a guess as any…)

In 1913, the NS&T built the Lakeshore Division – primarily to assist with supplying materials for a new-and-improved Welland Canal. As part of this plan, the railway decided to continue east to Niagara-On-The-Lake. The line left St. Catharines via Welland, Niagara and Facer Streets to reach Port Weller – then followed Lakeshore Road east through McNab to NOTL. Traffic included passengers, fruit, and – during The Great War – military troop trains.

The line was not long-lived, however. Traffic volumes tanked as The Depression took hold, and in January of 1931 the line was abandoned east of Port Weller. Still, the track was retained on this bascule bridge to reach the site of a storage yard for the canal system.

Then in 1947, the Government of Canada established the Port Weller Drydocks on the east side of the canal, on the south side of Lakeshore Road. Part of the complex can be seen in the photo: Look for the peaked roof behind the utility pole at the extreme right of the picture.

Initially, the site was used to store gates and other canal equipment, but it soon expanded to conduct repairs on ships. In 1956, the Upper Lakes Shipping Company purchased the operation from the government, and added shipbuilding to its work. It would construct dozens of vessels. (As an aside, its production would include the MV Holiday Island and MV Vacationland – two roll-on, roll-off ferries built in 1971 for Canadian National Railways and used in service between Prince Edward Island and the mainland at Nova Scotia and New Brunswick, respectively.)

I don’t know what trackage was in place in this area in the 1950s. However, from my set of CNR Track Maps, I know that in the early 1980s there was a run-around and three potential switching locations on the east side of the canal, including a team track (on the former main track east to NOTL) and a spur into the dry dock itself. I also know that several railfan excursions made the trip to Port Weller.

The bridge is still in use today, but the track is long gone.

I’m not sure this fascinating bridge will make it into my layout designs, but the Port Weller area could make an interesting exhibition layout. Even if I never build it, I expect that at some point I’ll draw it up…