This is an example of something I never knew existed on the NS&T, because it was gone long before I explored the railway…

I’m working my way through the collection of photographs, maps and other materials I’ve recently acquired from William Flatt – and I thought I’d share some of the images that speak strongly to me about the Niagara St. Catharines & Toronto Railway. In yesterday’s post, I shared a photo of the Lock 1 bascule bridge that carried the NS&T over the Welland Canal at Port Weller. This photo takes us back to Thorold – but still up in the air: 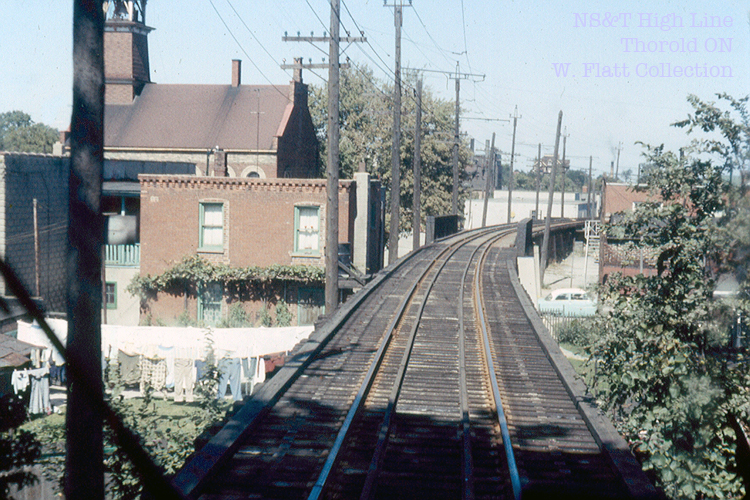 North of the Thorold station, the NS&T main line between St. Catharines and Niagara Falls vaulted onto a long stretch of trestles, bridges and fill to speed through Thorold. It was called the High Line (and as the name suggests, there was also a Low Line, which took local services through Thorold streets).

This picture was shot in a similar location to a black and white photo in the first NS&T book by Andrew Panko and Peter Bowen. We’re just to the west of Front Street, running behind the buildings on that thoroughfare. We’re looking north, and the white and blue automobile is driving east on Albert Street. The tall building at the left is the old firehall, on Albert at Ekins Lane.

This area has changed dramatically. The remains of the second Welland Canal (1845-1915) used to parallel the NS&T, out of view to the left of the image. It ran between Front and Pine Streets, and was a source of water and power for paper mills in the area. With the disappearance of the NS&T and a number of the industries it served in Thorold, the town filled in the waterway in the early 1960s. A number of new buildings have been built on that reclaimed land, as well as on the NS&T right of way.

My collection includes several photos taken in and around Thorold. I will have to share more of those as I get to them…