A reader commented that the NS&T seemed very urban compared to the types of model railways I’ve built in the past – including my Port Rowan in 1:64 layout and the earlier Maine On2 projects. And it’s true – there’s a more urban feel to the NS&T. But it had its share of open country running, too: Here’s an example from the collection of photographs, maps and other materials I’ve recently acquired from William Flatt: 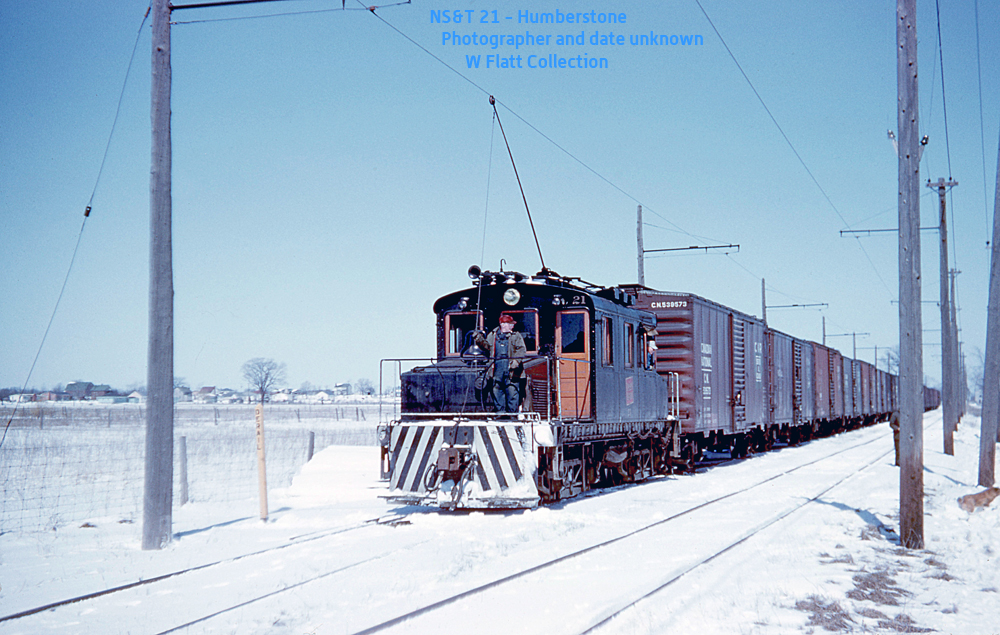 NS&T 21 between Dainsville and Humberstone. Photographer and date unknown.

NS&T 21 was built by the Canadian Locomotive Company in Kingston, Ontario in 1927 as Montreal and Southern Counties 327. The NS&T acquired this locomotive in 1941 and scrapped it when electric freight service ended in 1960. At 60 tons, it was not only the heaviest freight motor on the NS&T, but also the railway’s heaviest piece of equipment.

We’re looking north in this photo, on the Welland Division line. The train is working south – the crew member on the locomotive is assisting with “back-poling” – towards Port Colborne. Based on the photo description and the 1930 Employee Time Table reprinted in the revised John Mills book, this is the 1,087-foot siding between MP 16.20 and 16.40, just north of Humberstone.

With that long train of boxcars in tow, the crew is likely headed towards the Robin Hood Flour Mill in Humberstone (the north part of Port Colborne). Located on the west bank of the Welland Canal and reached by a spur that left the mainline between Courtland and Omer Avenues, the mill had six tracks and was a major customer: in the peak season, the NS&T could switch 70-100 cars during the day shift, and many were headed for Robin Hood.