This week, I’ve been sharing photos of the Niagara St. Catharines & Toronto Railway that were taken in and around Thorold, from the collection of photographs, maps and other materials I’ve recently acquired from William Flatt. In this post, I have not one but five photos to share: a sequence of views taken at the station. They’re not as sharp as they could be, but they have so much valuable information in them for the modeller that I had to share… 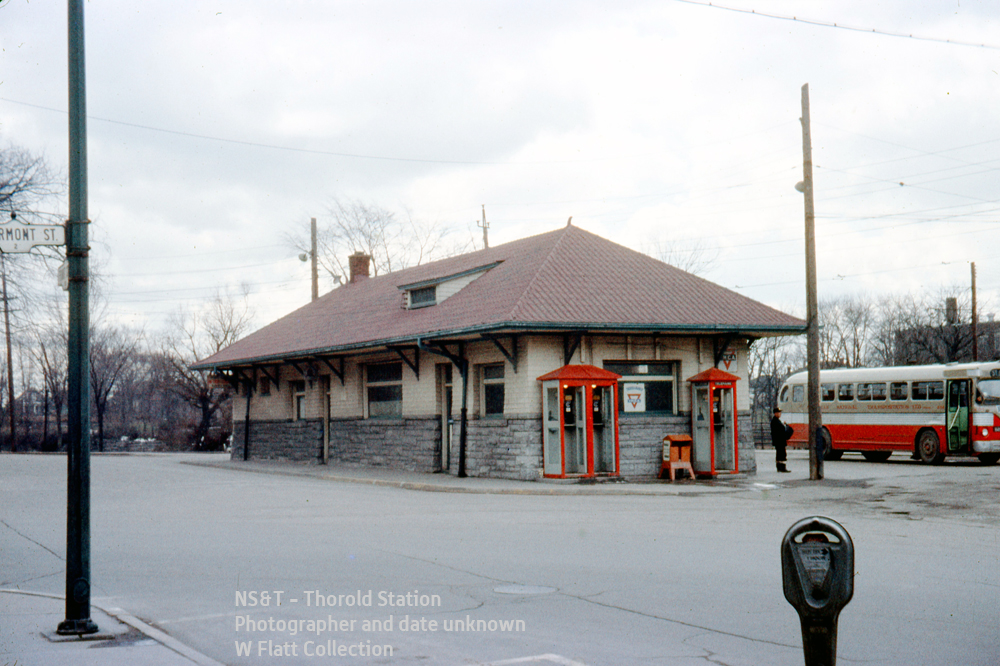 This is a great overview shot of the NS&T station in Thorold. It was shot from the north, looking southwest. Not only does this photo feature the entire back and right side of the station in one frame, it’s also a terrific painting guide. The details are great too – such as the phone boxes, the parking meter, and the line poles: I see at least three pole-mounted lights to illuminate the platform area.

Note the bus, standing on the former main track at the station. At one time, there was a double-ended siding here, but the main track was removed and the siding turned into the main track to accommodate buses at the station. In addition to its railway operations, the NS&T ran a fleet of buses in the Niagara Region, starting as far back as 1929. Over the years, these included city buses, sight-seeing and charter operations, and highway services. The NS&T was the first component in the CNR system to adopt buses, and the railway maintained buses for itself and several other operators under the Canadian National Transportation Limited umbrella.

While I’m not sure what route this particular bus is covering, one possibility is that it’s in local service between Thorold and Merritton. This route was previously covered by the Low Line, but service on that line ended in the early 1930s and the Low Line tracks were lifted following an acrimonious dispute over the renewal of the operating franchise between the NS&T and the town of Merritton. By this date, the bus is likely running north beyond Merritton to St. Catharines, too. 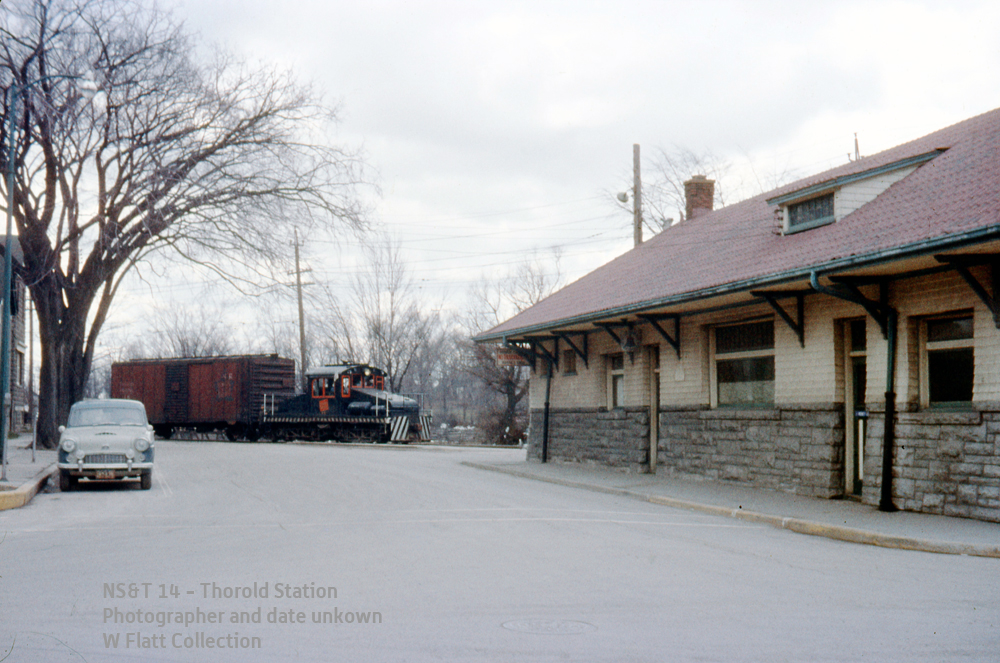 Here, the photographer has captured a short freight movement. NS&T steeple cab 14 has arrived from the south with a CNR boxcar. When this photo was taken, this 40-ton GE Steeple Cab was the lightest freight motor in service on the NS&T. It was built in 1914, rebuilt in 1943, and scrapped in 1960. 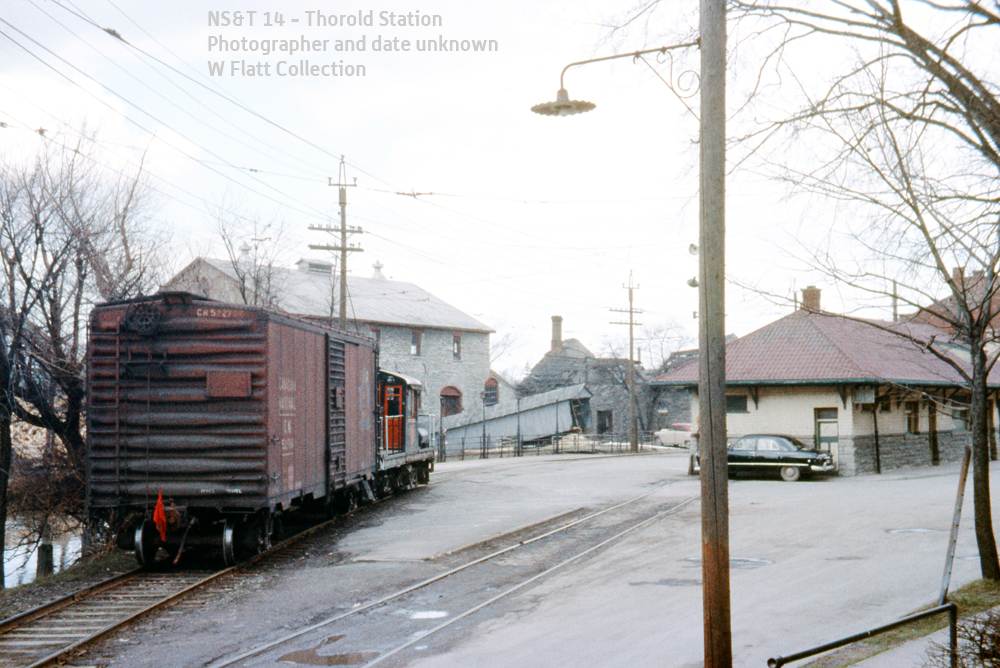 The photographer has repositioned to the south end of the station area and is looking north. There’s a lot of great information in this photo – including the left (south) wall of the station, the layover spur for passenger cars working between here and Port Colborne, and even a good look at the ornamental bracket for a street light.

The grey stone building to the left of the main track, across from the station, is served by a spur that can be seen in Photo 5, below. It’s identified in the 1938 Employee Time Table as Davy Paper Company and in the first book by Andrew Panko and Peter Bowen as the Welland Pulp Mill. To the left of the boxcar, one can make out the glimmer of water: that’s the mill race off the no-longer-used second Welland Canal. This can also be seen in Photo 5, below.

The CNR boxcar appears to be 522786. It has a red flag in its coupler to bring up the markers, but there may be more to this train, as the next photo suggests: 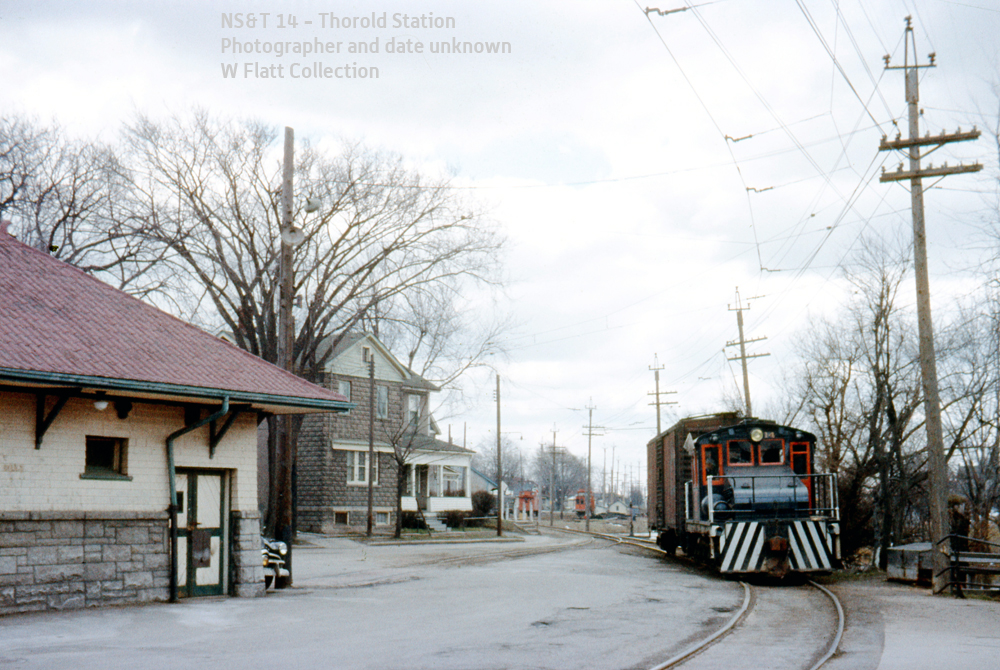 The NS&T freight motor and its boxcar are in the same position as in Photo 3, but the photographer has repositioned himself to the west side of the station. If the bus from Photo 1 is still hanging around, it’s just out of view to the left. The wide expanse of pavement between the track and the station is where the former main track used to run through here. In this photo, the main track is the former siding.

This photo also provides a good look at the grey house at the end of the street, which regularly provides a backdrop for pictures of passenger cars spotted on the layover siding (for example, this one from Wednesday’s post).

In the distance, two orange-painted pieces of equipment can be seen in the small Thorold freight yard. The one of the right is NS&T line car 31, which I wrote about on Monday. To the left of it is a van (caboose). My guess is that NS&T 14 is operating as a train (with a flag to bring up the markers) as it’s occupying the main track. But I think it’s move from the yard to the mill spur north of the station (as shown in Photo 5), and that it will drop the boxcar and then return for the van: It’s unlikely a van would lay over in Thorold. But that’s just a guess. 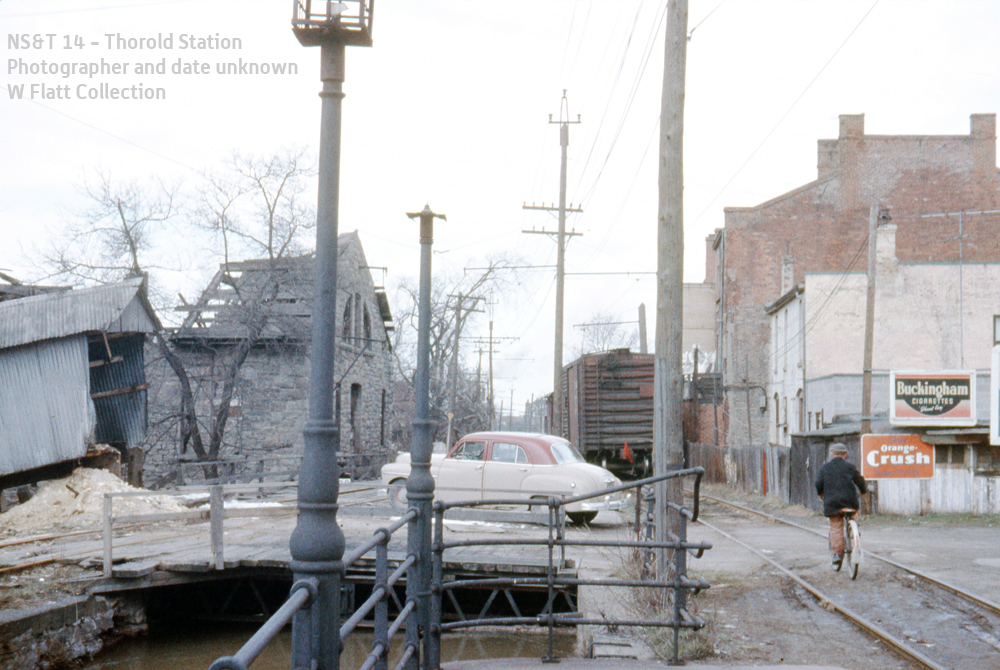 Our “train” is heading north, out of the station area and towards the High Line. The buildings at right are the backs of businesses on Front Street. The mill described in Photo 3 is to the left, out of the picture, at the other end of the walkway clad in corrugated metal. Note the water of the raceway in the foreground. The automobile here can also be seen in Photo 3. The stone building at left is obviously derelict. I’m not sure what it was. It could be a former part of the mill, but it sure does have fancy windows for an industrial structure…

I suspect the crew on Number 14 will stop shortly and then back the boxcar onto the mill spur, which can be seen just in front of the automobile. (Why do it this way? Why not bring the van along for the ride? My theory here is that the crew of Number 14 wants to be able to duck out of the way of a passenger movement. The mill spur is quite short, but there’s enough room for a freight motor and single car to clear a passenger train. Obviously, a van on the main would be in the way, too: better to just leave it in the nearby yard.)

I also suspect the kid on the bike will stay to watch the proceedings: I know I sure would…

Phew – that’s a lot of Thorold! Tomorrow, I’ll share some freight switching from a much busier yard on the system.