As I work my way through the collection of photographs, maps and other materials I’ve recently acquired from William Flatt, it’s clear that Car 83 was a popular choice for railfan trips. Here’s an example, running rare mileage on the NS&T: 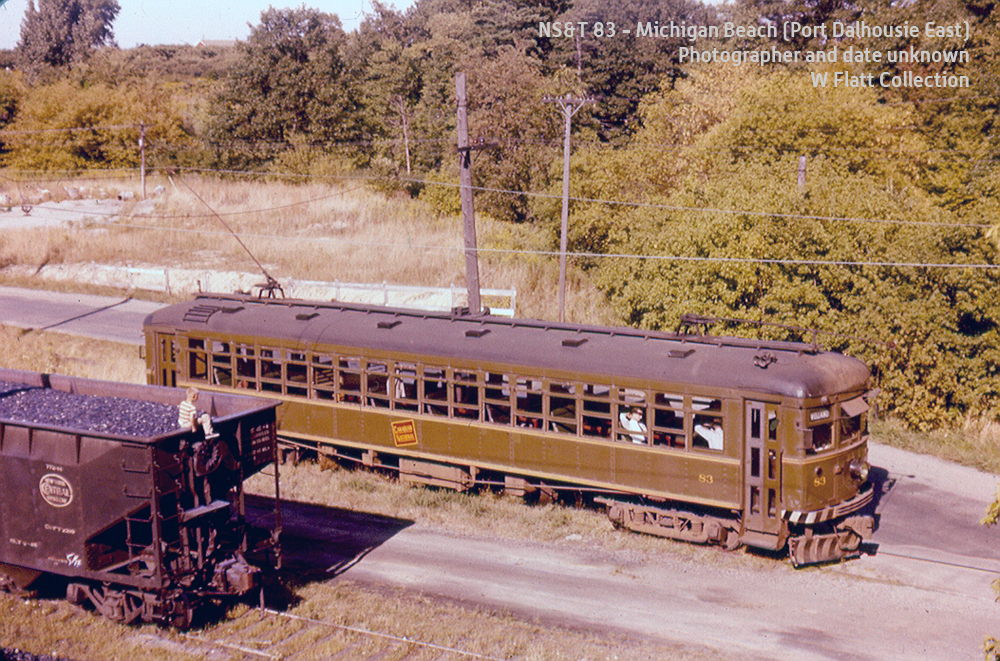 Based on other photos taken of this car at this location, I’m pretty sure the date of this photograph is September 8, 1957. Car 83 is on an enthusiasts’ excursion trip on what is normally, by this time, a freight-only line.

Where the heck is Michigan Beach, you ask? It’s another name for the east side of the basin where 12 Mile Creek and Martindale Pond empty into Lake Ontario. It was also called Port Dalhousie East, as the boats from Toronto would exchange passengers here with NS&T Main Line trains to Niagara Falls, before turning in the basin to dock at the west side at Port Dalhousie, where Lakeside Park is located.

As the hopper car might suggest, there was a coal transfer operation on the Michigan Beach side of the water. Once the NS&T discontinued its boat trains, this 2.93-mile line – the Grantham Division – remained in operation for freight, as there were a number of customers along its path between Michigan Beach and the Geneva Street terminal downtown. Just northwest of the terminal, the 1923 St. Catharines Fire Maps show a major rail-served industry – Canadian Crocker-Wheeler Company – in the block between George and Catherine, south of Russell Avenue. This complex appears in 1955 aerial photos, although I don’t know what company is on this site at that time. Today, it’s the Catherine Street Park – and the NS&T Grantham Division that used to run past it is now the Terry Fox Trail…

(My thanks to members of the NS&T Facebook group, who helped me to identify the location.)