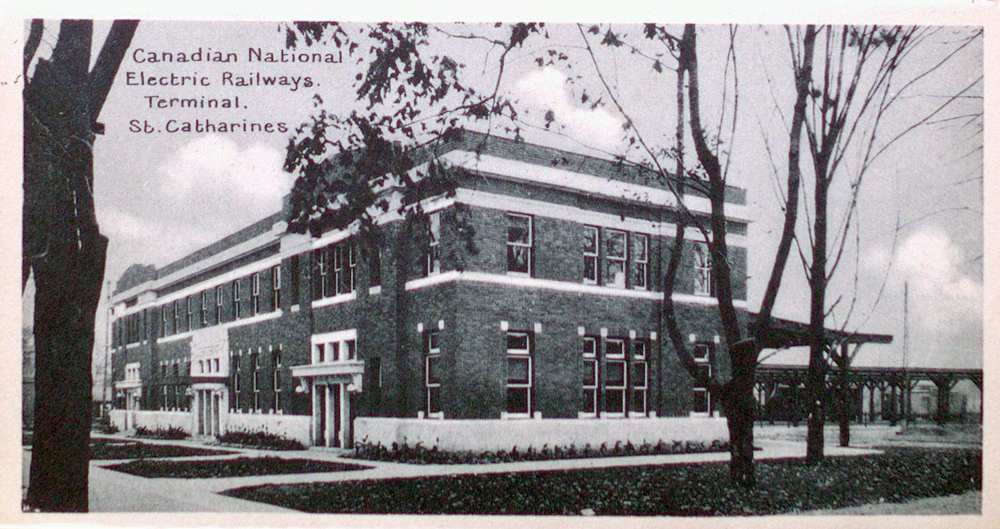 This is a terrific view of the main terminal building for the Niagara St. Catharines & Toronto Railway. It shows off the design of the building quite well, having been photographed after most of the leaves had fallen out of the trees: In the summer, the building would’ve been obscured in the greenery.

Built by the CNR in 1923 and opened in 1924, the terminal faced Geneva Street. The NS&T’s head offices were located on the upper floor, while a ticket office and waiting room occupied the street level. It had three stub tracks and three through tracks on the north (far) side of the building, running parallel to Balfour Street. There’s a good map of the terminal trackage on page 48 of the revised book by John Mills.

The terminal was designed to accommodate trains on the Lake Shore, Welland, and Grantham Divisions, as well as the Main Line to Niagara Falls. City cars would provide connections to the downtown, just to the west. However, Mills notes the terminal was never used as intended. Few runs originated or terminated here and Welland Division trains never used it. In later years, photos show the platform tracks sometimes occupied by maintenance of way equipment.

The terminal later housed a Bank of Montreal branch and a business (secretarial) school. It was demolished in (I believe) the 1990s to make way for a strip mall. (Ironically, the mall’s tenants currently include a “Subway” restaurant.)

It’s difficult to see, but there are at least two pieces of NS&T equipment, including a line car, occupying the platform area at right.