Many photos were taken of the Niagara St. Catharines & Toronto Railway and most of the best ones have been published – often several times. But occasionally, a rare one pops up. That’s the case with this photo – new to me – which I found in the collection of photographs, maps and other materials I’ve recently acquired from William Flatt: 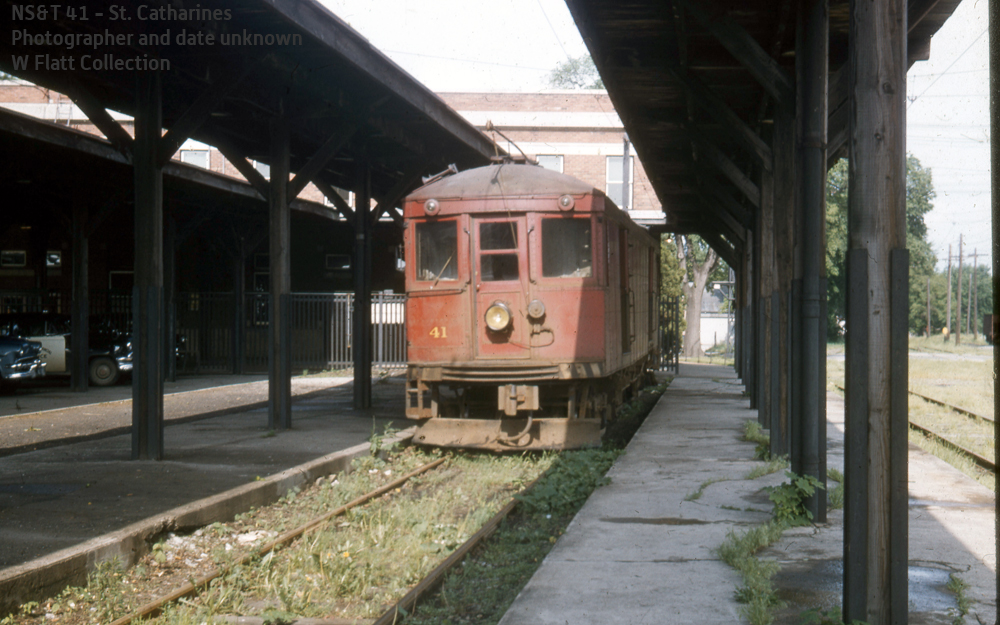 NS&T express motor 41 sits on the back track at the railroad’s main terminal in St. Catharines.

The photographer is standing on the southeast side of the terminal, looking northwest towards the building. Geneva Street is on the far side of the structure, while Welland Avenue is to the left.

As noted in a previous post, there were six tracks in the terminal – three stub-end spurs, and three through sidings. Comparing this photo to the map of the terminal trackage on page 48 of the revised book by John Mills and counting from right to left, express motor 41 is sitting on the stub track between platforms 3 and 4. A through track runs past the right (north) side of platform 3, and continues up the Grantham Division to Port Dalhousie East.

To the left, the track between platforms 4 and 5 still exists but it appears the track between 5 and 6, at extreme left, has been filled in: Note the two automobiles parked under the canopy. One of these is a police car, and in a discussion on the NS&T Facebook Group a member mentioned that for a while, the terminal was used by the RCMP. (I’m trying to pin down the dates for that and will update this post if I’m successful.)

Between the steel express motor and the stub-end terminal with covered platforms, this photo really reminds me of the O scale modelling of the late Bob Hegge on his Crooked Mountain Lines.