Holiday-makers headed to Port Dalhousie for a day at the beach left from downtown St. Catharines, took the Louisa Street cut-off to Woodruffs siding, then slipped downgrade behind the McKinnon Industries plant to cross 12 Mile Creek – so named because the mouth of this waterway on Lake Ontario is located approximately 12 miles west of the Niagara River.

Here are some photos of the bridge over 12 Mile Creek – from the collection of photographs, maps and other materials I’ve recently acquired from William Flatt: 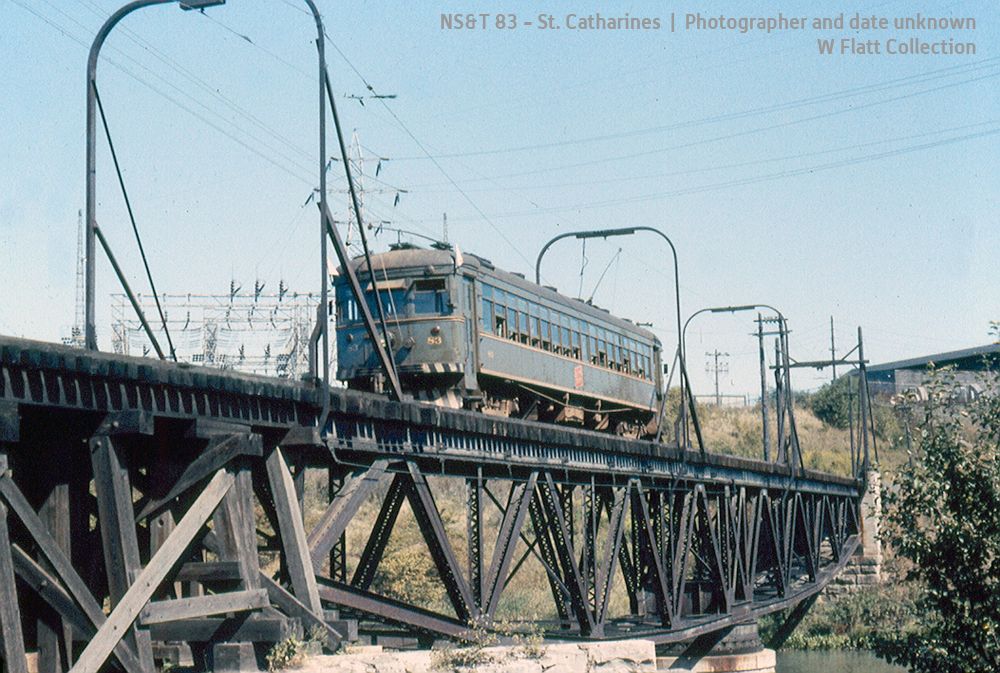 These two views were likely taken on the same day, during an enthusiast fan trip. While I can’t confirm the date, the revised book by John Mills includes several photos of Car 83 taken on September 8, 1957 – including a Robert Sandusky picture at this bridge. (In fact, it’s quite possible the top photo is his picture, as there’s a shot in the Mills book that appears to be this photo, but cropped.)

NS&T 83 is outbound in these photos, headed towards the photographers and towards Port Dalhousie. The white flags show it’s running as an extra movement – not on the schedule – which supports the theory that this is a fan trip.

The line to Port Dalhousie was built in 1901 – so presumably, this is when the bridge was constructed. 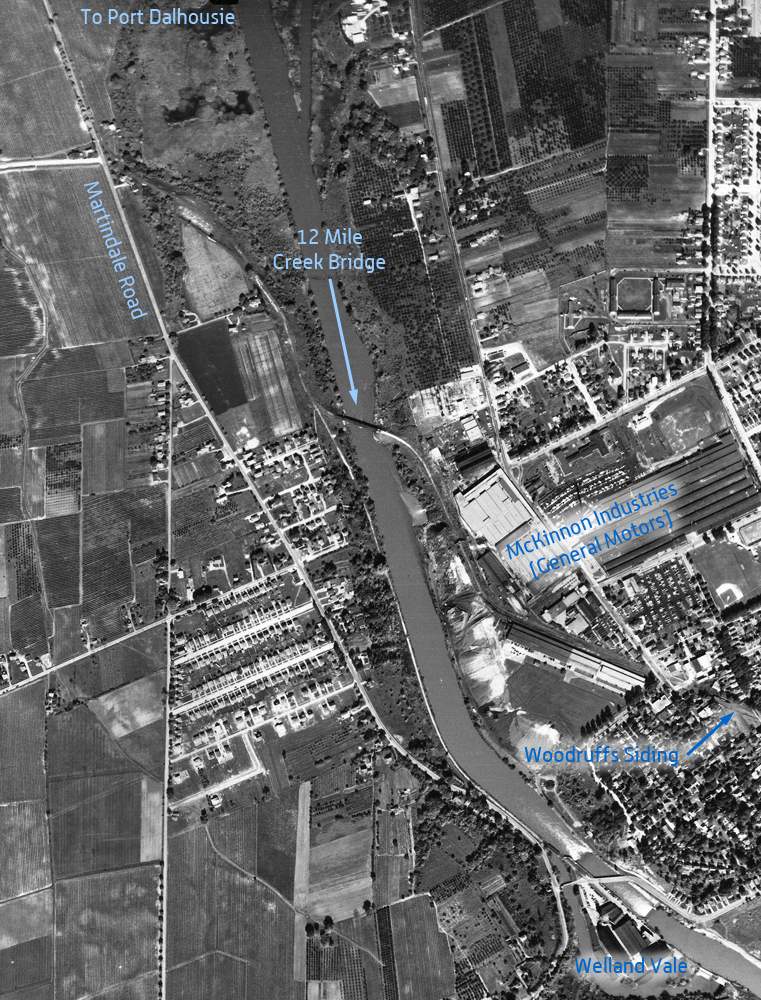 When the line to Port Dalhousie was built, 12 Mile Creek was no longer part of the Welland Canal: As part of the construction of the Third Welland Canal in the 1880s, the route was changed to cut diagonally southeast from Port Dalhousie. But there must’ve been traffic upstream of this bridge – or at least, the potential for it – because it was built as a swing bridge. 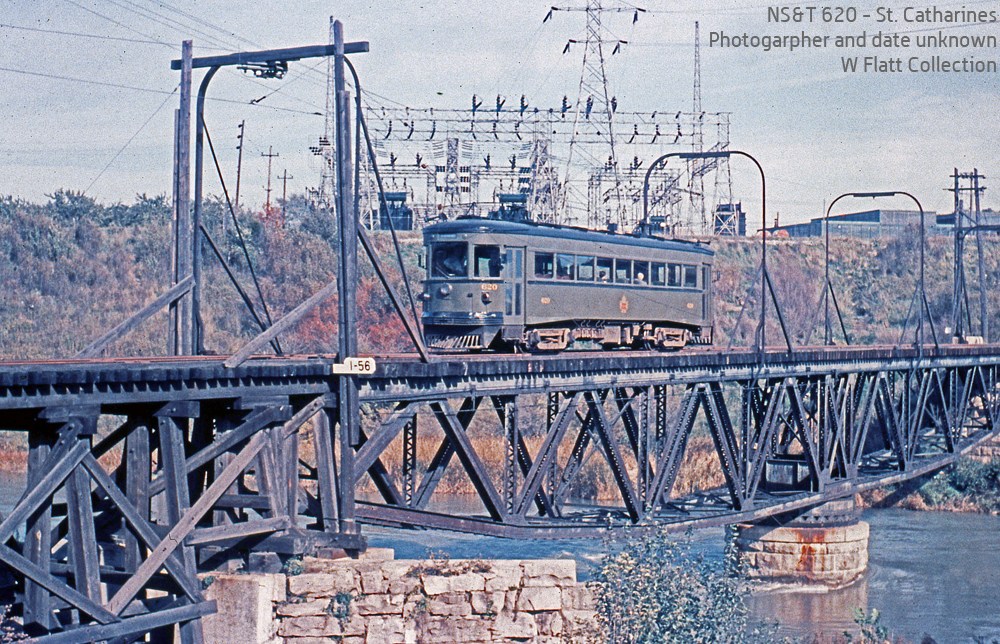 This photo is a good illustration of the method used for supporting the overhead wire where the swing bridge meets the approach. 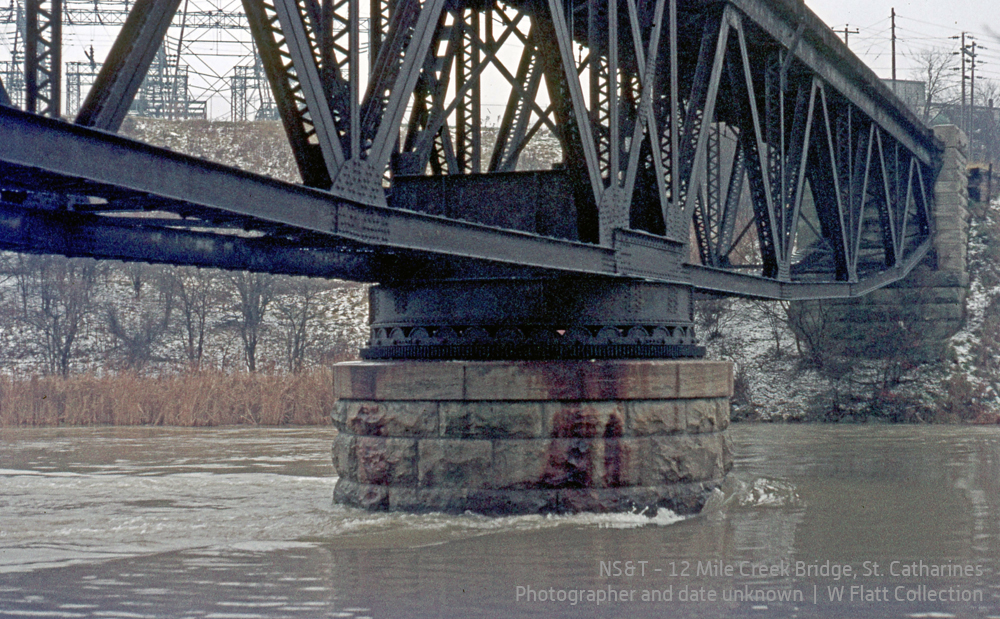 This image provides a good look at the central pier, and the rollers upon which the bridge would’ve turned. The abutment on the far (east) bank features a stone column to the right of the steelwork that would prevent the bridge from rotating clockwise. Based on this, the bridge would’ve rotated counter-clockwise to clear the river for traffic. However, it hadn’t been opened for many years by the time these photos were taken.

I’m not sure when the bridge was removed, although it was gone when I lived in St. Catharines in the 1980s. However, the central pier is still in place – a reminder of the days when St. Catharines visited the beach under wire…

(Today, 12 Mile Creek is a fast flowing, dangerous river with undertows and turbulent currents. Over the years, many people have drowned trying to shoot the rapids in this area.)

On the west side of the creek, the line climbed a hill to reach Martindale Road. 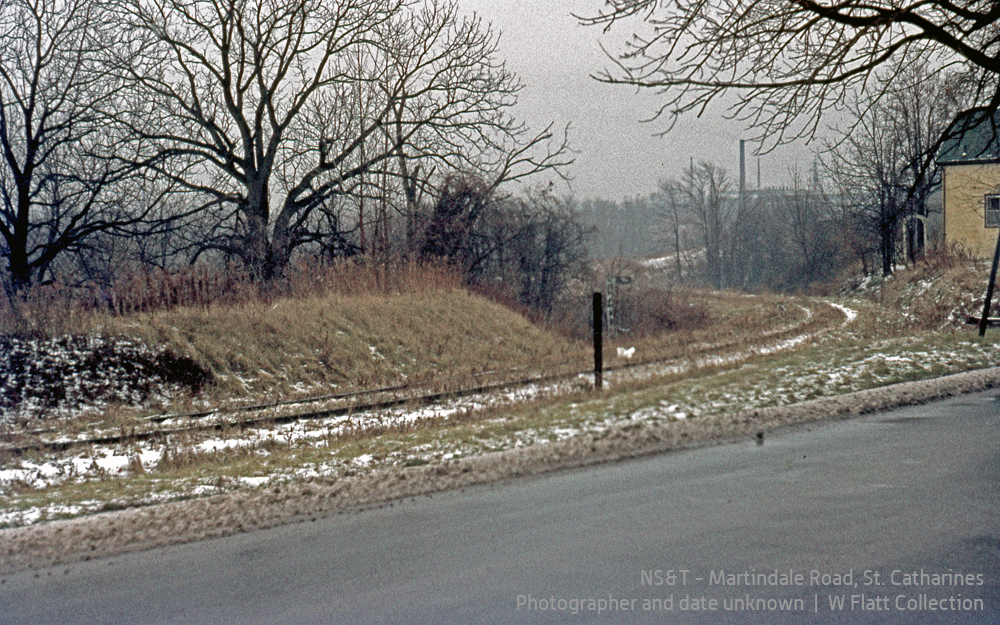 There was another bridge on the line to Port Dalhousie that was popular with railfan photographers – and I’ll share some photos of that bridge in a future post.