Niagara St. Catharines & Toronto Railway interurban car 83 was frequently recruited for fan trip duties and shows up in many of the images in the collection of photographs, maps and other materials I’ve recently acquired from William Flatt – such as this one: 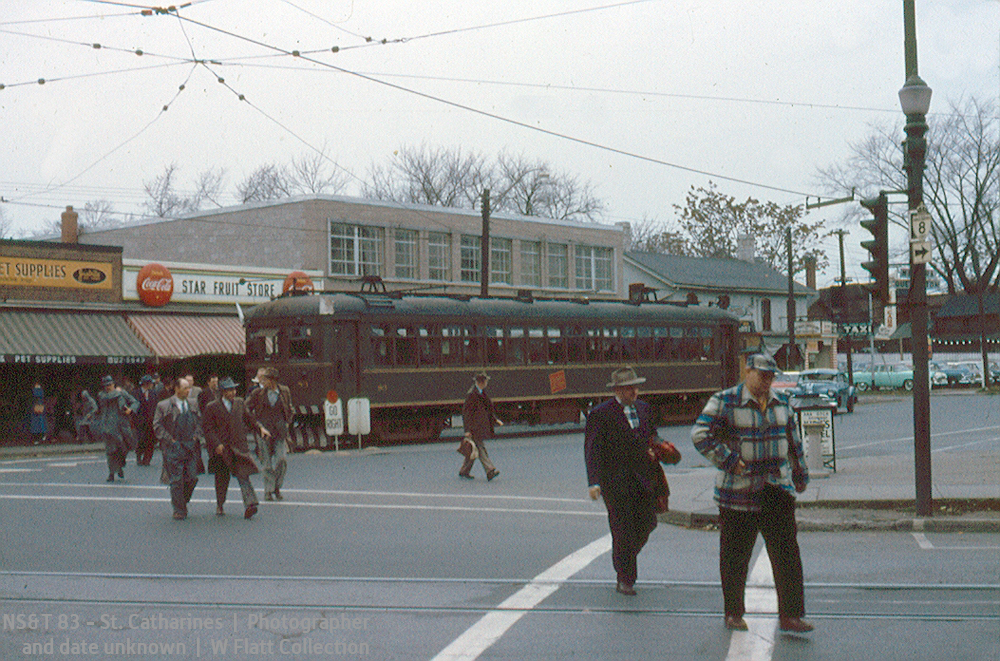 Car 83 is headed south on Geneva and has just arrived at the five-way intersection where Geneva, Niagara, St. Paul and Queenston come together. The photographer is standing on Queenston Street and shooting northwest. The car is running in extra service – note the white flags – and I’m guessing all those serious-looking gents are rail fans. (Perhaps they’re headed for lunch at the Queensway Hotel? It’s directly behind the photographer…)

I have shared many photos of Car 83 on this blog, but since it was such a well-photographed interurban the details are worth repeating:

The NS&T built Car 83 (as well as the second car to carry the number 82) in 1925. It had 72 seats and weighed 80,000 pounds. Interestingly, the NS&T built 83 not for itself, but for the Toronto Suburban Railway as that line’s number 107. The car came home to the NS&T in 1935 and was stored out of service. That changed with the demands placed on public transit by World War II. The car entered service on the NS&T in 1943, on trucks salvaged from NS&T Car 80 and 600-volt electrical equipment out of Car 133. Originally painted in the two-tone scheme, Car 83 was repainted in the mid-1950s into the CNR green scheme shown here. It was scrapped in 1959. 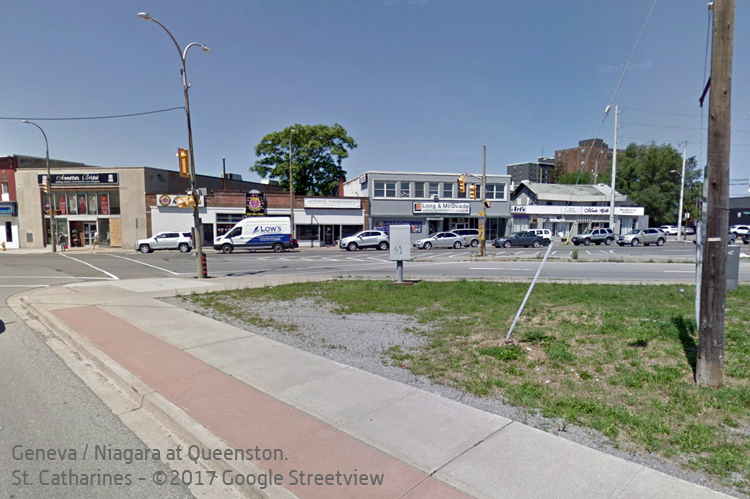 While the NS&T is long gone, the intersection looks a lot like it did back in the 1950s. The same block of buildings stands, with different tennis. Even the parking lot to the north (right) is still there – although in the earlier view, it appears to be a car dealership.

This photograph was taken just east of the location where – on a different day – NS&T steeple cab 14 was caught hauling a boxcar to the factory on Phelps Street, which I shared in a previous post. The track in the foreground is the line along Queenston to Phelps Street.