I made a trip down to Port Colborne, Ontario recently to visit my friend Jim Martin. Jim and his wife recently moved to a smaller property and wanted to unload some pieces that were surplus to their needs – including this whistle post, once used on the Niagara St. Catharines & Toronto Railway:

Jim rescued this post many years ago from an abandoned portion of the NS&T’s Grantham Division, which ran from the main terminal in St. Catharines Ontario to a lake boat connection at Port Dalhousie East. This Division was originally built in the mid-19th Century as part of the Welland Railway – a line that paralleled the canal to transfer grain and other bulk commodities between steamships on Lake Ontario and Lake Erie. The Grand Trunk Railway leased the Welland Railway in the 1870s and acquired it outright in the 1880s – and it’s likely that the whistle post was built during the GTR’s ownership.

The GTR later became part of the CNR. As part of its improvements to the NS&T in the mid-1920s, the CNR electrified this line in 1924-25 then leased it to the NS&T on January 1, 1926. The Grantham Division would be used by mainline passenger trains – connecting with NS&T lake boats out of Toronto at Port Dalhousie East to take tourists to Niagara Falls. This whistle post would’ve regularly warned the motorman at the controls of the NS&T’s handsome wooden interurbans to alert motorists of their presence as they carried loads of tourists to (or from) a day in the Falls. 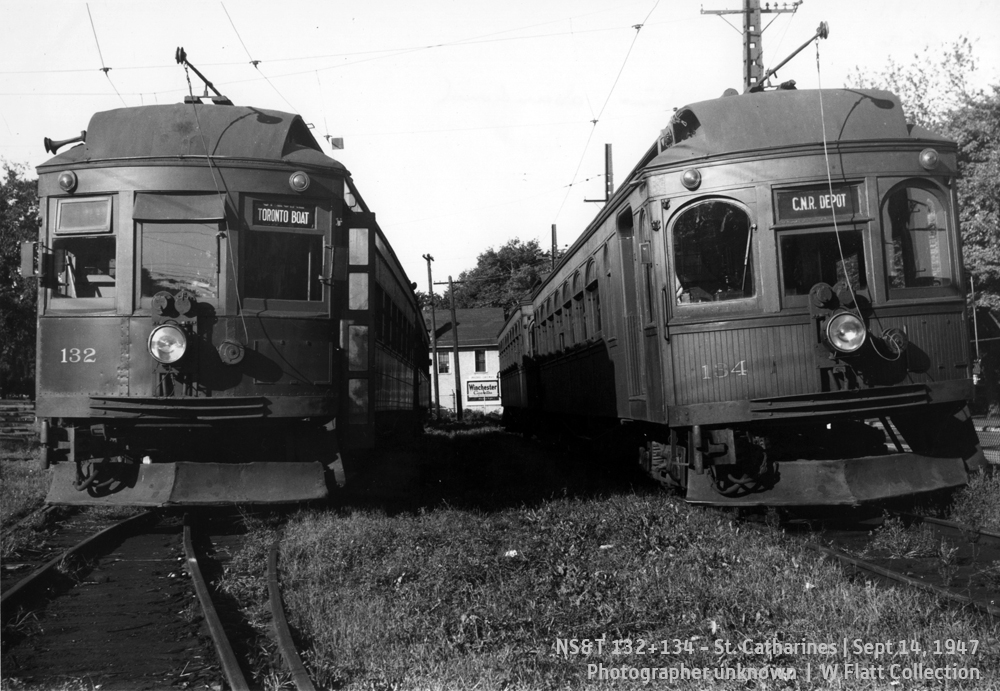 The last of the boat trains ran in September 1947, and the passenger shelter at Port East was torn down in 1951. The line continued in operation for freight – the Port Dalhousie East terminal also featured a bulk coal transfer facility – and was used for at least one fan trip under wire, in 1953.

As with the rest of the NS&T, I assume the wires came down for good in 1960. I’m not sure when the rail itself was abandoned but it does not show up on the mid-1980s CNR track maps in my collection.

Many years ago, Jim would walk his dog along a portion of the abandoned Grantham Division that ran on an embankment behind the Fairview Mall in St. Catharines. When he learned that this embankment was to be flattened to make space for more parking lot at the mall, he knew that the whistle post would either be plowed under or sent to landfill. He recruited a friend and rescued the post from oblivion.

For many years now, the post has resided in Jim’s backyard, lying on its back and mounted on blocks – disguised as a garden bench. He offered it to me about a year ago, but it’s taken this long for me to get my act together to collect it. Why the delay? For one thing, I thought I would require the help of a friend to load it at Jim’s and unload it at home. As it turns out, two people could handle its 200 pounds without too much trouble, so Jim and I loaded it at his place.

At home, I received help from the architect/contractor with whom we’ve been working to renovate our house for the past several years. That renovation is about to include a remodelling of the garden, and you can learn more about the new home for this whistle post on my Adventures in Live Steam website.