Those wishing to learn more about the Niagara St. Catharines & Toronto Railway can draw on a number of resources. While there are website and groups online, I find myself returning time and again to the following traditional media, presented in order of publication…

The first book I know of on the NS&T, this 118-page softcover volume was jointly published by the Upper Canada Railway Society and the Ontario Electric Railway Historical Association. I’m not sure of the publication date, although my copy has a handwritten note on the title page that says simply “December – 4 – 1971”. There’s no ISBN. It covers the history of the NS&T, its predecessors, and its various components – including the interurban operation, city car lines, navigation company, and bus services.

This 48-page softcover book of photos and captions was published by NiagaRail Publications in 1983, for the Niagara Division of the Canadian Railroad Historical Association. 1,000 copies were printed. There’s no ISBN. It contains a number of full-page pictures, and several not published elsewhere.

A follow-up to their earlier collaboration, this 144-page hardcover was published by NiagaRail Publications in 1984 (ISBN 0-920184-02-6.) The book features a painting by Anton Akkerman on the cover, and 2,000 were printed. It continues the Panko-Bowen exploration of the NS&T via well-captioned photos – and like their first volume, it includes many large photos of subjects not found elsewhere. 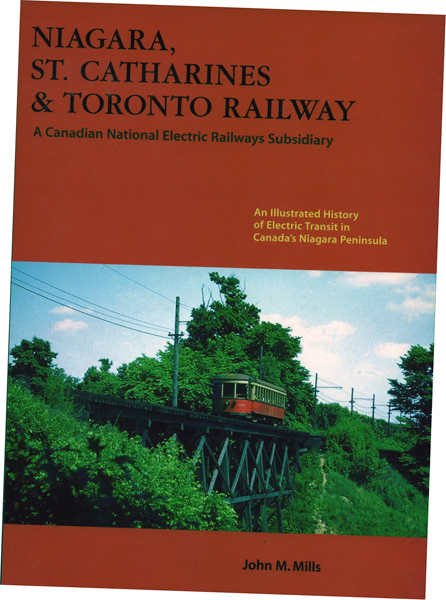 As with the first Mills book, this one covers the history of the NS&T, its predecessors, and its various components – including the interurban operation, city car lines, navigation company, and bus services. But at 256 pages, it includes much more – including some 300 photos (50 in colour), maps, histories, rosters, drawings of select pieces of equipment, and so on. If you’re only casually interested in the NS&T or Ontario railway history, this is the one for you. (If you’re a student of the line, you’ll want all four of course!)

(I frequently refer to this book as “the revised book by John Mills” elsewhere on this blog.)

“Niagara St. Catharines and Toronto Railway – The Little System That Could” (DVD)

This 60-minute DVD – published in 2010 – is narrated by Ray Neilson and includes interviews with author John Mills, as well as a number of rail fans who experienced the NS&T first-hand and captured it on film. It also includes interesting footage of the boats from Toronto, Lakeside Park in Port Dalhousie, and other goodies courtesy of the St. Catharines Museum. My DVD player has trouble playing this video sometimes – it jumps from chapter to chapter – but it’s well worth the agro. Still in publication, and available from GPS Video. (I’ve included a link on the home page of this blog, under “Resources”.)

4 thoughts on “NS&T: Four books and a video”