A visit yesterday with my friend William Flatt produced a gold mine of information about the Niagara St. Catharines & Toronto Railway, including a set of official track maps of the Welland Subdivision (from Thorold to Port Colborne). The railway produced the original maps in 1920, and revised them in 1948. Here’s a look at Thorold – a combination of two of the map pages: 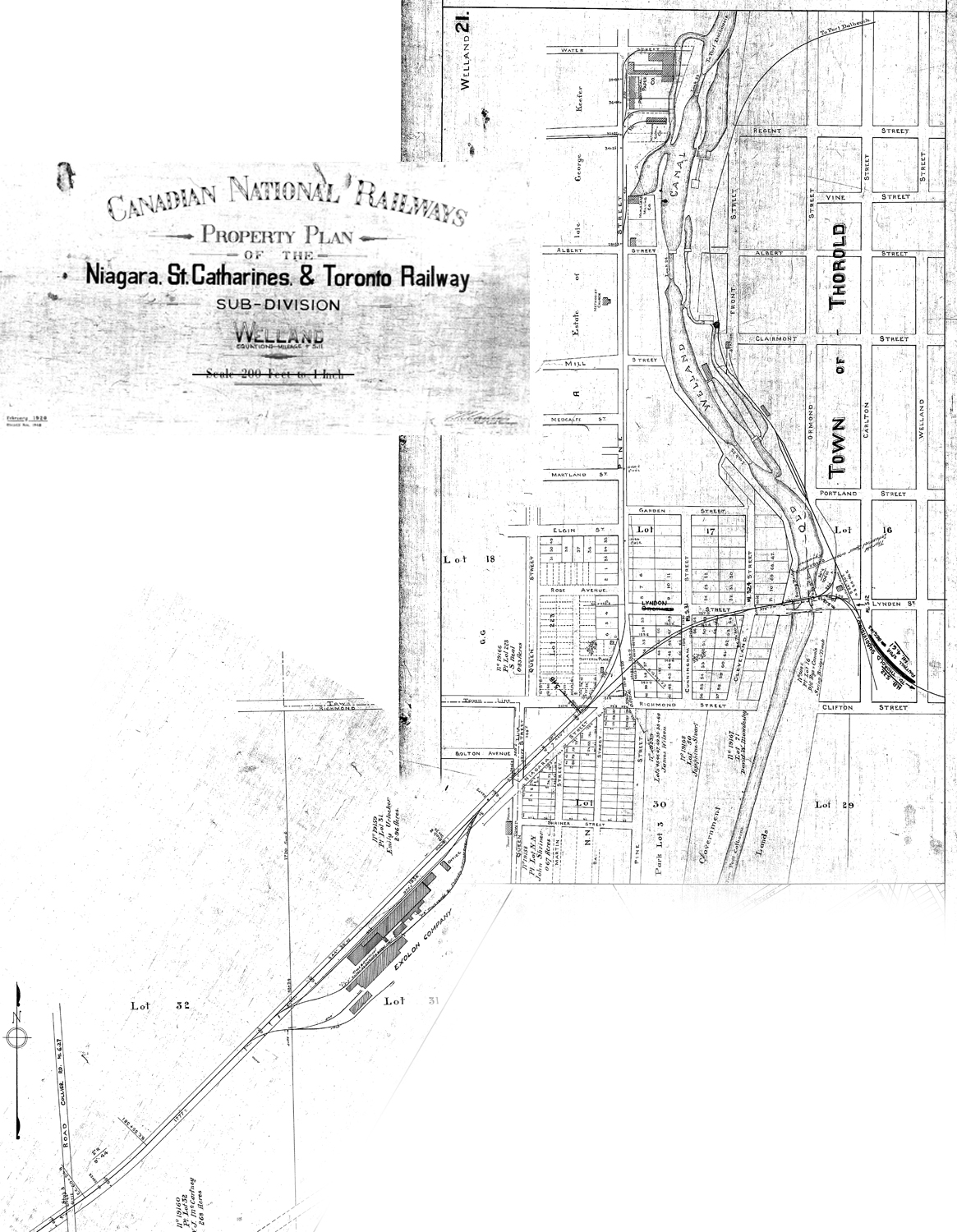 Thorold, on its own, would make for an interesting layout. In Thorold, the railway had a station, a small yard including a scale track, a junction between the Main Line to Niagara Falls and the Welland Sub, a substation, a couple of major industries (including Exolon and the paper mill on Pine Street) and more. It would provide plenty of construction challenges and operating opportunities.

In the lower left corner, the line heads south towards Fonthill.

I have a lot more material to dig through from yesterday’s trip, and will share it as time allows.

The Niagara St. Catharines & Toronto Railway interchanged with the Canadian National Railways system in a small yard at Merritton, Ontario – now the southeast corner of St. Catharines. My visit with my friend William Flatt yesterday produced a couple of images I hadn’t seen before, which I’m sharing here. 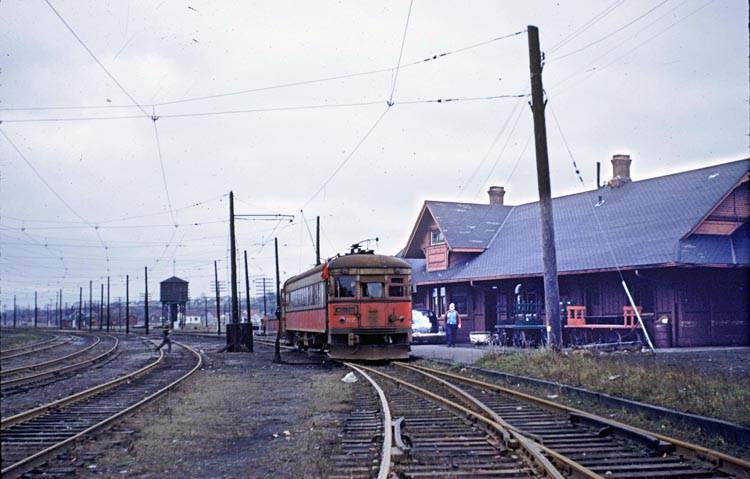 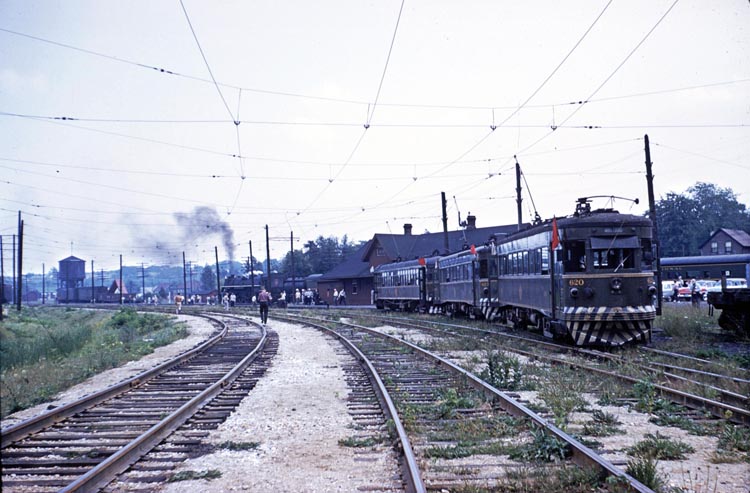 Again, based on the file name, I believe this photo was taken August 31, 1958. It shows a three-car railfan special. The first two units are sisters 620 and 623 – 50-seat interurbans built by the Ottawa car company in 1930 and acquired from the Montreal & Southern Counties – another CNR electric operation – in 1956. They were the most modern cars ever to grace the NS&T, and were scrapped in 1959.

The third car appears to be NS&T 83 – a sister to 82, the subject of the first photo in this post. It was also built by the NS&T in 1925, but for the Toronto Suburban Railway as that line’s #107. It returned home in 1935, where it was in storage for several years before returning to active service. It was scrapped in 1959.

Each car is flying white “extra” flags, plus red flags to bring up the markers. The poles have been switched for a run north into St. Catharines, but the flags have not yet been swapped end for end. Note the steam-powered CNR passenger train on the far side of the station.

I have a lot more information to process from yesterday’s trip, and will share it as I can…

I grew up in St. Catharines in the 1980s, and that’s the era I remember on the Niagara St. Catharines & Toronto Railway. Of course, by that time the trolley wire had been gone for a couple of decades – it came down in 1960 – and much else had changed. Customers disappeared, and new customers were added. Trackage was rearranged – often with new connections made. And so on.

Still, any knowledge of “what was there” can only be a good thing. Years ago, I collected a set of CNR track maps – including associated indexes that identify each track. Here’s what I have. Note how each zone map includes the links to adjacent zones.

Zone MM
This 1983 map covers the transfer yard at Merritton, where the NS&T interchanged with the CNR. 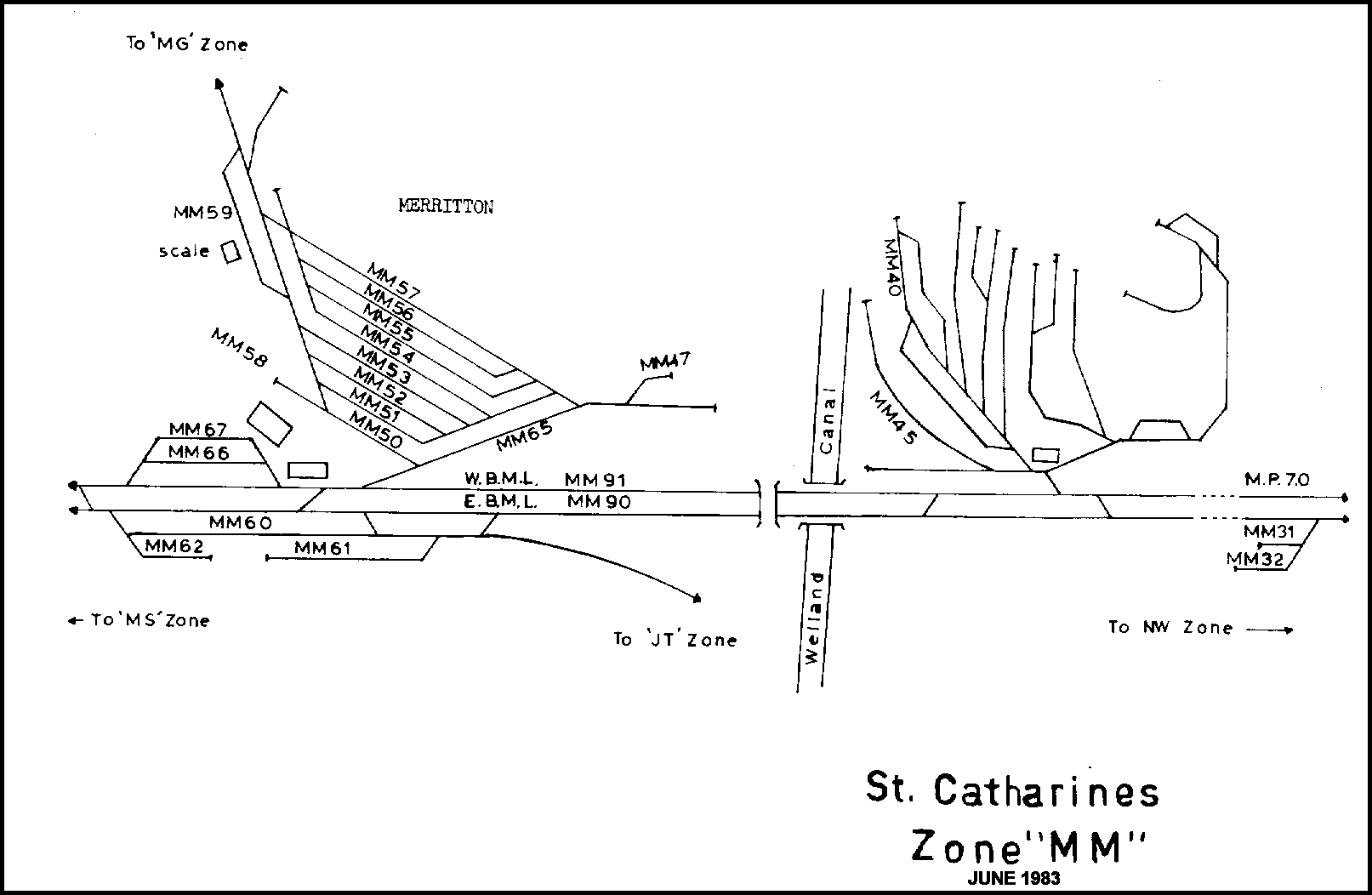 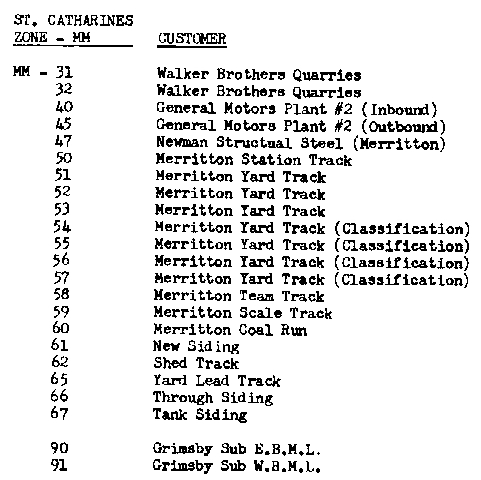 Zone MG
Moving north from Merritton Yard, the line’s hub of operations was the Eastchester Yard area. This map is from 1985. 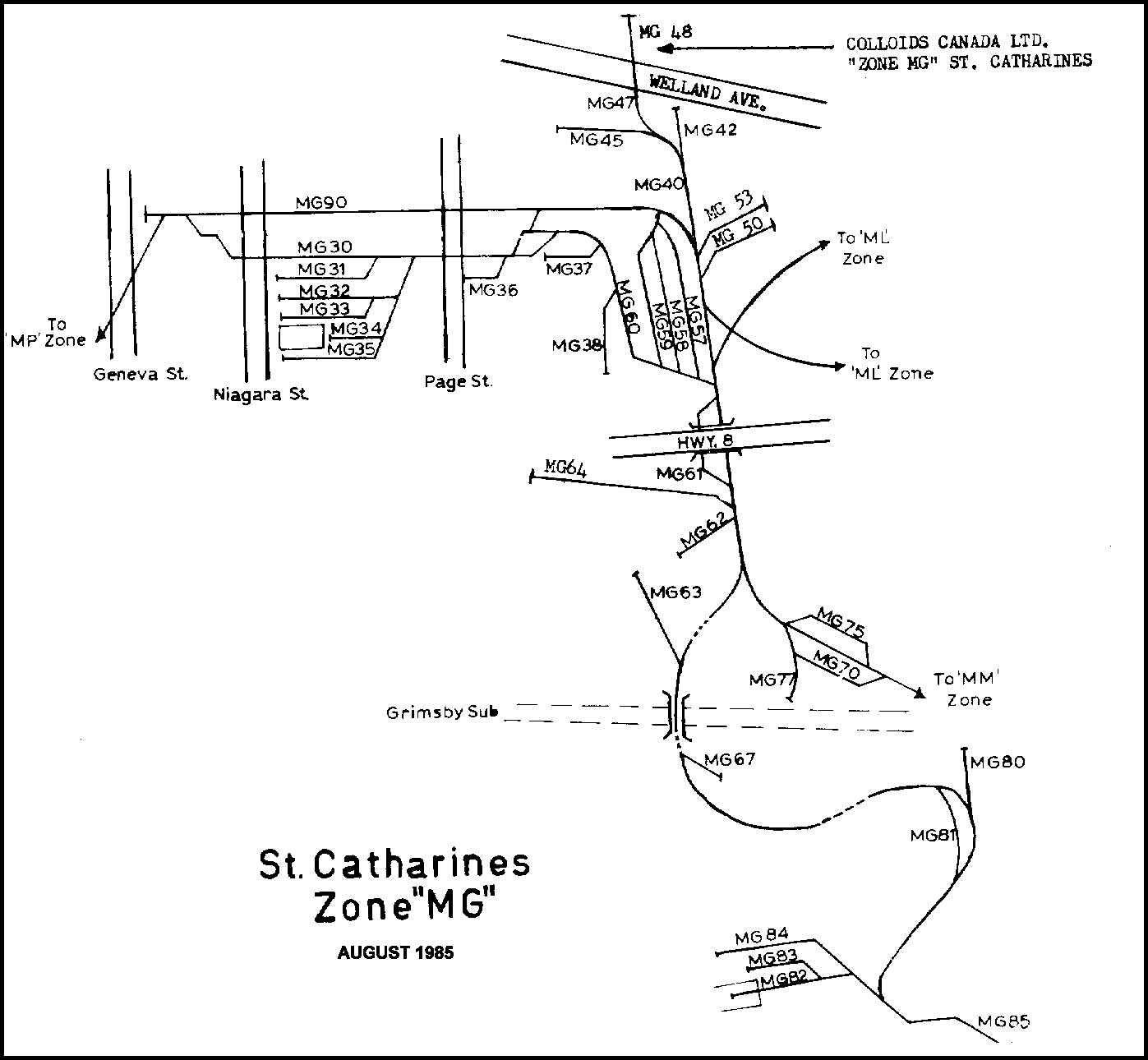 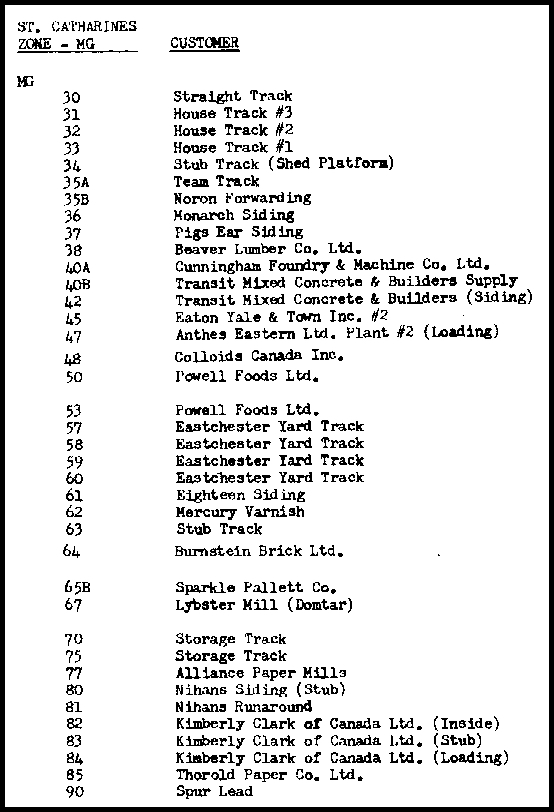 Zone ML
This map, from 1981, covers the area east of Eastchester Yard and up to Port Weller on the Welland Canal. 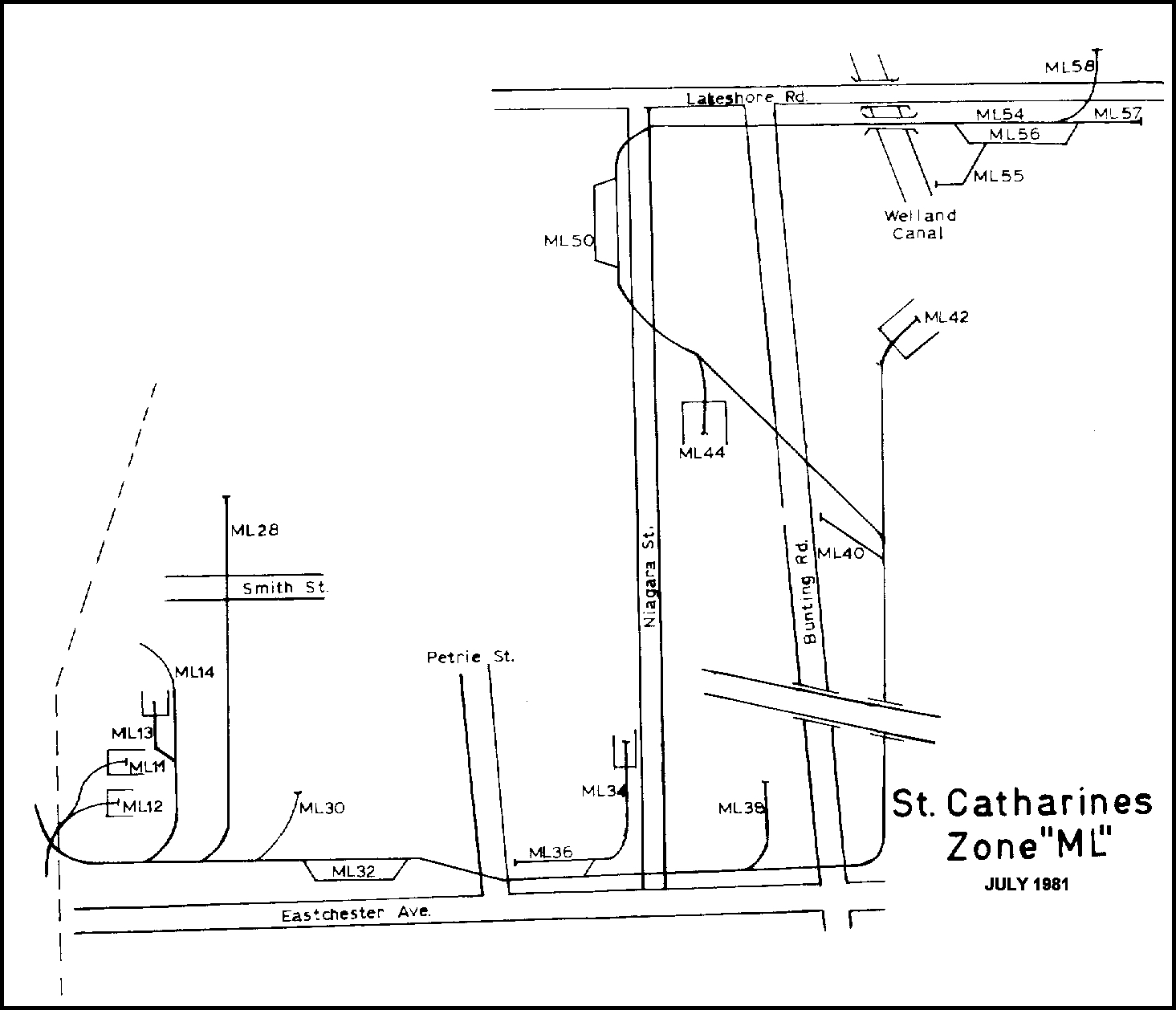 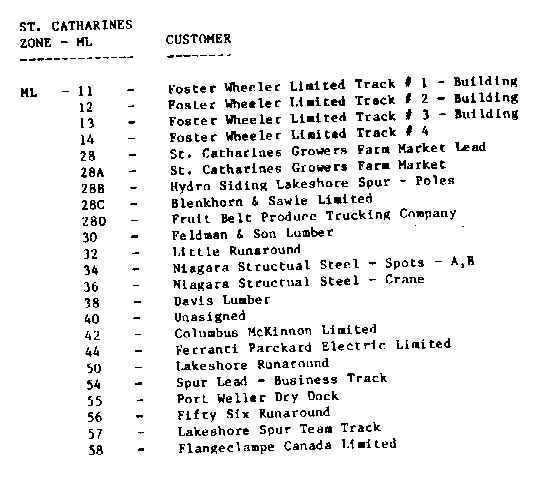 Zone MP
This map, from 1983, covers the track along Louisa Street and up Ontario Street to serve McKinnon’s (General Motors). 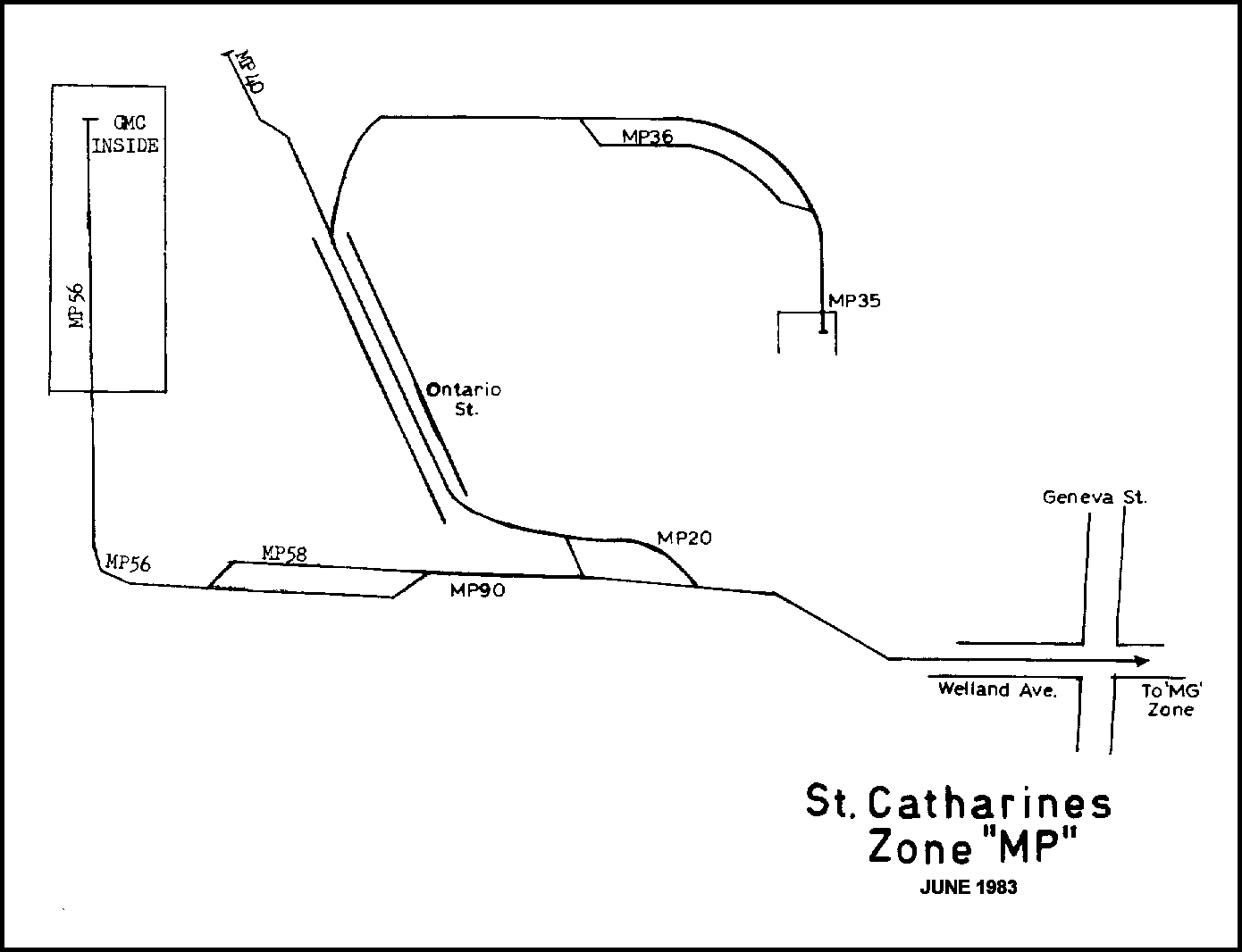 I’m grateful that I have these. I can compare them to other sources – such as the 1923 Fire Maps I recently found online – to develop a better picture of the NS&T in the electric era.